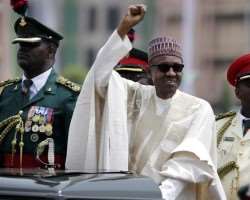 Nigeria’s president has exaggerated the military’s success against Boko Haram, say officials in northern Nigeria in response to an American commander’s testimony that the Islamic extremist group still holds territory.

President Muhammadu Buhari said in January that Boko Haram is “currently not holding any territory today as we speak.” His claim — made at a summit in Abu Dhabi — was met with skepticism in Nigeria.

Buhari’s claim was contradicted last week by Gen. David Rodriguez, commander of U.S. Africa Command, who told the Senate Armed Services Committee in Washington that Boko Haram “does own some significant territory in northern Nigeria.”

Rodriguez’s statement indicates that Nigeria’s government is overstating its success in the campaign to eliminate the extremists, a few northern officials said this weekend.

“All we know is that Boko Haram lacks the capacity to carry out their usual commando-like attacks during which they march in and run down towns or villages, but that is not enough to say that they are not around,” said Ngari Modu, a transport official in the Nganzai area of northeast Borno state.

Modu, who stays in a camp for displaced persons in the city of Maiduguri, said his home village and surrounding areas remain “no-go” zones.

“We are left confused each time we hear soldiers saying no territory is now under the control of Boko Haram,” he said by telephone.

In the 10 months since he took office promising to halt the insurgency, Buhari has replaced the military’s leadership, resupplied soldiers and moved the headquarters for the fight from the distant capital, Abuja, to Maiduguri.

Sen. Mohammed Ndume of Borno said that Nigeria’s soldiers are succeeding in cutting off Boko Haram’s access to food and supplies and he is confident that eventually the military will regain all territory from Boko Haram.