In South Sudan, city of hope is now city of fear 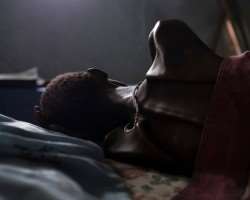 Diu Tut glanced up at the gates of the displaced persons camp where he lives and shook his head.

“I can't go out there,” he said.
“Why not?” he was asked.
“Because of this,” he said, rubbing the soft tribal scars on his forehead that mark him as a member of the Nuer ethnic group. “It's my death certificate.”

A lot of people in this town feel the same way. Juba, South Sudan's capital— and this whole country, for that matter — has slid so far from where its people dreamed it would go.

The Republic of South Sudan is not even five years old, but already 50,000 people have been killed in an ethnically driven civil war replete with mass rape, civilian massacres, countless people displaced, killings at hospitals and now children starving to death in sunshine-flooded pediatric wards, skin peeling off their little backs like paint chips flaking off old wood.

On paper, the war is supposed to be over. An agreement solidified last month calls for a cessation of hostilities, the formation of a joint security force and the end of the political feud that started the war. Riek Machar, the rebel leader accused of staging a coup attempt more than two years ago, is supposed to return to his position as vice president.

But most people here do not believe what's on paper.

In the camp where Mr. Tut and tens of thousands of displaced Nuer live, few feel safe enough to venture out, peace deal or not. The camp is on Juba's outskirts and many camp dwellers have homes less than two miles away. They fled at the outbreak of the civil war, and even now they say they will be killed if they try to return.

Juba has turned into a messy city of great fear. I remember how ebullient it was just five years ago on the eve of independence. After decades of war and millions of lives lost to free itself from Sudan, the nation was burdened with daunting problems, of course, but it was also brimming with promise. Flags flapped proudly in the air and a clock counted down the days to independence, decorated with the words “Free at Last.”

But even after billions of aid dollars, many roads remain dirt, covered by a thin, crunchy layer of crushed plastic water bottles. Boys on motorbikes putter past smoking piles of garbage. Pickup trucks packed with soldiers careen recklessly into traffic, the young men in back angrily shaking their machine guns at anyone unfortunate enough to cross their paths.

At night, shots ring out and people are killed.
The government chalks up Juba's continuing violence to what it calls “unknown gunmen,” but there is little investigation. Most people believe the culprits are government soldiers, anyway. They just can't say that too loud for fear that they will be next.

Much of the bloodshed is due to the bitter, ethnically tinged rivalry between the government, led by members of the Dinka ethnic group, and Mr. Machar's rebel alliance, made up of mostly Nuer. But some of the worst violence, such as the fighting last year that left chopped up body parts scattered across the swamps, was Nuer versus Nuer, grisly evidence of a society splintering deeper and deeper.

Before the civil war broke out in December 2013, South Sudan's economy had one thing going for it: oil. But the oil fields soon became battle zones, and then the world oil price plummeted. On top of that, the oil deal South Sudan triumphantly signed with Sudan after splitting off from Sudan in 2011 is not looking so great anymore.

When it comes to oil production, the two Sudans are hopelessly linked. The south is home to the biggest reserves; the north has the pipelines to export it.

Instead of splitting profits, South Sudan agreed to pay Sudan a flat fee for every barrel pumped through the northern pipeline. That transit fee, along with some other debt South Sudan has to repay to Sudan, amounts to around $25 a barrel. But with the global oil price hovering around $40 a barrel, South Sudan is now steadily draining its most precious resource for very little in return.

Photo
Few of the Nuer ethnic group members who live at the camp feel safe enough to venture out, peace deal or not. The camp is on Juba's outskirts and many camp dwellers have homes less than two miles away. But they say they will be killed if they try to return.

But it has few options. Nearly all of the government's revenue is generated by oil, and at a time like this, the government can't afford not to pay its soldiers.

Before South Sudan became independent, Sudan's leaders tried everything in their power to prevent the south from breaking off. Oppression. Neglect. A vicious civil war, characterized by scorched villages and slave raids. When it became clear by the early 2000s that it could not win, Khartoum, Sudan's capital, appealed to the court of world opinion, trying to persuade Western powers that the south was too poor, too uneducated and too divided to govern itself.

Sadly, many observers say, the chaos that has broken out in South Sudan since independence is very similar to what the northerners had been warning about all along. More than a half a dozen cease-fires have been shattered. Though Mr. Machar has agreed to return as vice president, he has yet to do so, citing security concerns. Many people believe he is just stalling.

Dressed in dark suits with his signature black cowboy hat (a gift from President George W. Bush), he is known as a decent and religious man but also as a bit of an enigma.

“It's very difficult to pin down the personality of Kiir,” said James Solomon Padiet, a professor at Juba University. “Most of his decisions depend on who influences him at the moment he makes it.”

He said that Mr. Kiir had urged his generals to respect human rights but that when government troops committed atrocities, as they have over and over again, Mr. Kiir did not punish anyone. “He says: 'It's on you. God will punish you,' ” Mr. Padiet said.

Mr. Kiir also needs each and every one of those generals to stay in power, the professor added.

On a recent day, the waiting rooms outside Mr. Kiir's office were crammed with high-ranking officials and other people hoping to meet with him, but he did not show up to work.

Juba is incredibly uncomfortable these days, with temperatures soaring into the triple digits and the air thick and sticky. People along the road hide under mango trees or in the shallow shadows cast by parked trucks, desperate for shade.

These are the last days of dizzying heat before the spring rains hit and shut down many roads. Aid organizations are racing to preposition emergency food for the nearly three million South Sudanese edging toward starvation.

“It costs $2,000 in bribes,” he said. “Per truck!”
Aid organizations are begging for more money, but donors seem to be getting tired.

“Most people think they have seen this movie before,” said John Prendergast, co-founder of the Enough Project, an anti-genocide group.

The well-worn narrative of helpless, starving South Sudanese “wildly oversimplifies” the reality, he said. “The real story,” he said, “is one of a falling out among kleptocratic thieves, whose self-enrichment free-for-all before and after independence led competing factions to use ethnicity as a mobilizer, which is the equivalent of aiming a flamethrower at an oil rig.”

Mr. Tut recently graduated from a business program. His books — “Public Administration,” an English grammar book and the Chinua Achebe novel “No Longer at Ease” — lie in a dusty stack on the dirt floor.

He said his best friend at university was a Dinka.
“We still talk on the phone sometimes,” he said, his voice trailing off. “But I haven't seen him for months.”