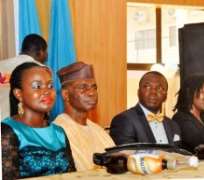 A foundation, Segun Adeleye Foundation for Good Leadership in Africa (SAFFGLIA) to encourage governments across Africa to embrace good governance in order to uplift the standard of living of the people among others was unveiled today in Lagos.

The event held at the Afe Babalola Hall of the University of Lagos on Thursday March 10, 2016, attracted the presence of the Hon. Minister of Information and Culture, Alhaji Lai Mohammed as guest speaker for the Lecture, “Setting Agenda For Good Leadership in Africa”; the chairman of Bi-Courtney, Mr. Wale Babalakin, represented by Molara Wood, Head Corporate Communication, Resort International, chaired the event.

The three in one event also witnessed the launch of a book: So Long Too Long Nigeria, authored by Mr. Segun Adeleye, Founder of SAFFGLIA and President/CEO World Stage Limited.

The minister who was represented by the Director, Lagos Operations, News Agency of Nigeria, Joe Bankole described the birth of SAFFGLIA as the beginning of a new done for good leadership in Nigeria. According to him the present administration is a representation of the values that the Foundation stands for, adding that the government is proud to associate with the foundation.

The minister identified corruption as the biggest challenges facing African development. He noted that the administration of President Mohammed Buhari is committed to fighting the menace in order to secure the future of the unborn generations.

He said: “Leadership is about integrity and accountability and Nigerians has voted for President Buhari to change the face of leadership in Nigeria and transform the nation for the benefit of all, and Nigerians really need to give him time to enjoy the promised change,” Minister stated.

While recommending the book to those in authorities, government and corporate organizations he noted that, “The fact that majority of issues captured in the book are testimonies of present realities in the country today shows that Nigeria has not changed over the years”.

In his opening remarks titled, Africa: The Tragedy of Wrong History, Mr. Adeleye went memory lane from the first coup in January 15, 1966 trying to identify where things went wrong.

He pointed out how bad leadership had held Africa hostage for years preventing the young generations from attaining their full potential.

He highlighted the visions of the foundation to include, to draw attention to activities of governments from local to national levels and encourage/ compel them to do things in the best interest of the people; it will engage in leadership training programmes that will champion the spirit of development of their societies in Nigeria and Africa; it will promote research into good leadership in Africa, among others”.

Dr Adeleke Ipaye, Senior Special Assistant to Osun State Governor, who represented Governor Rauf Aregbesola at the event commended the author, saying his crusade for positive leadership is in line with the agenda of the current leadership in Nigeria.