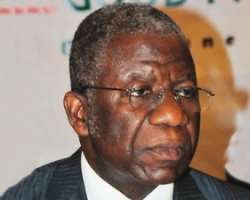 The Economic and Financial Crimes Commission (EFCC) has arrested a former Head of the Civil Service of the Federation, Mr. Steve Oronsaye, for an alleged N240m fraud.

Oronsaye, who is already being prosecuted by the EFCC on 24 counts of money laundering, was arrested again on Tuesday based on fresh evidence.

The former civil service boss is alleged to have abused his position as Chairman of the Presidential Committee on Financial Action Task Force and obtained a sum of N240 million from the Central Bank of Nigeria in the guise of assistance to the committee without the knowledge of other committee members and proceeded to convert the said sum to his personal use.