Ranieri backs over-achieving Foxes to stay calm on run in 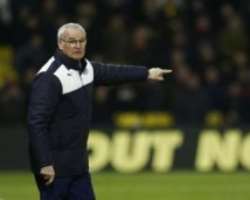 – Manager Claudio Ranieri is confident that nerves will not derail Leicester City’s season, after watching his team defeat Watford 1-0 to stretch their lead at the top of the Premier League table.

Ranieri said the team’s self-belief stemmed from the fact that they had already achieved their main target of avoiding relegation and that they would not flag in their remaining fixtures.

“We’re not nervous. Our job is done. Our job was to save the team,” the Italian told the club’s website (www.lcfc.com).

“The target was safety and it’s important to remind people who Leicester were. The first target was to save the team.

Ranieri said Leicester’s spirit would stand them in good stead during the title run in and that the Foxes would continue to fight hard for a first Premier League title.

“We know very well it’s a strange chance that we have, but we want to fight,” he added.

“The key of this season was from the beginning, when there was a good link, a good feeling, between me and the players.

“The electricity started from the beginning. This is an amazing season for us. Everything we achieve is something more. We have to build, slowly. For now, our focus is Newcastle.”

Leicester’s next Premier League fixture is at home to relegation-threatened Newcastle United on March 14.