No Witches In Ile-Ife Anymore—Ooni Ogunwusi 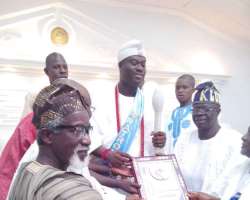 The Arole Oodua and Ooni of Ife, His Royal Majesty, Oba Adeyeye Enitan Ogunwusi on Sunday in his Palace said that the time was ripe for sons and daughters of Ife all over the world to join the massive development train in the town even as he declared that Ile-Ife was now free of evil witches and wizards.

The monarch made the assertion when he hosted a group of eminent sons of Ile-ife based in Lagos and other parts of Nigeria under the aegis of Ife Klub 1 led by former Lagos Lawmaker, and Chairman board of trustees, Hon. Ipoola Ahmed Omisore.

The Ooni said, “This Klub worked with my last two predecessors and is now working with me, so by the grace of God it will never disintegrate. I must stress to you all that the wellbeing of Ile-ife is paramount to me because we are like the proverbial white chicken who doesn't appreciate it's value. Whereas, it is in its home that the chicken is not highly regarded, it is highly valued abroad. God himself resides in Ile-Ife and that is the truth. There are many Ife sons and daughters who the land has blessed but they abandon their roots.

They say there are witches in Ile-Ife that kills children, or that if they establish businesses at home, witches won't allow them to prosper. Others are even making money in Ife yet they don't contribute anything to its development, rather they take their monies to Ibadan, Ilesha, Lagos, London and America. I implore you today, to let us lead by example and use our positions to help our people.”

The Ooni also expressed optimism that the ongoing redevelopment of the palace into a world class monument will attract thousands of tourists from far and near and ultimately boost the economy of the ancient town.

He said, “The Almighty has restored Ile-Ife’s glory and we must not let it go dim. So many people of Ife origin have refused to come back home and this is why we are making concerted efforts to put many things in place to attract them. An example is the palace that we are redeveloping which will be an edifice of pride for all Ife people because it's not only for the King.

.....Tourists from far and near will come here and marvel at the fabulousness of this palace. They will also get to learn about our rich cultural heritage. Do you know that people from China, Indonesia and other far flung places visit the Buckingham Palace in England just to witness the change of guards? Crowds troop the palace everyday just to see this and their culture is helping their economy.

This is why I am surprised that even Ife indigenes seem not to cherish their heritage. Plans are in motion already to reposition Ile-Ife but we should not leave everything to the Ooni. Those of you with businesses should come and establish in Ife, there are no witches here that will disturb anybody anymore. They now want to have money and send their children to school too.”

The Ife Klub 1 at the occasion installed and decorated the Monarch as it's 3rd Grand Patron with the past two Ooni’s Sijuwade and Aderemi having held the position as the second and first to be so honoured respectively.