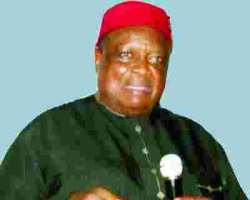 He has therefore asked all Igbo sons and daughters to rally round the embattled PDP chairman, adding that the clamour for Ogbulafor's resignation was the handiwork of those who wanted to contest the 2011 elections.

But just as Iwuanyanwu spoke, some youths under the aegis of Accord for Good Governance on Thursday staged a protest at the Okpara Square, Enugu where they called on Ogbulafor to resign from office over allegations of N170m graft preferred against him by the Independent Corrupt Practices and Other Related Offences Commission and weak leadership.

The placard carrying protesters stated that Ogbulafor should go and defend himself in court against the charges filed by the ICPC.

National president of the group, Mr. Ulem Uchenna, alleged that the activities of Ogbulafor and other PDP bigwigs from the South-East zone had thrown the political atmosphere in the area into confusion.

But in Abuja, Iwuanyanwu said same day, 'PDP under Ogbulafor has made tremendous success. Today, governors elected on the platform of other political parties are defecting to PDP because of the leadership acumen of the National Chairman. His removal will cause a seed of disunity and cohesion against the unity of the Igbo.

'Why is it that when any Igbo is elected or appointed into an office, it would be his kinsmen that would plot his downfall? This must stop. Look at what happened when the office of the Senate President was zoned to the South-East, almo