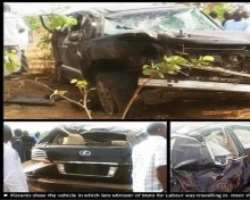 Minister of state for Labour and Employment Mr. James Ocholi, his wife and son died in a road accident on Sunday.

The accident occurred on the Kaduna-Abuja expressway when the car they were travelling in had a burst tyre, skidded off the road and somersaulted into the bush near Rijana village.

Witnesses said the minister and his son died on the spot while his wife died of her injuries in Doka Hospital where she was taken to for immediate medical attention.

President Muhammadu Buhari has expressed shock and sadness at the death of the minister saying the government had lost a key component of the change agenda.

Also, the governor of Kogi State (Ocholi's home state), Governor Alhaji Yahaya Bello yesterday declared a three-day mourning period in honour of the minister while his party, the APC, said in a statement that it was in shock.

News of Ocholi's death got to Kaduna through many travellers who came across the accident on their way to the state capital.

The police public relations officer in Kaduna, DSP Zubairu Abubakar said the Lexus Jeep that the minister was travelling in had a burst tyre and the car somersaulted, veering off the road in top speed and killing both the minster and his son on the spot.

He said the wife and others who were in critical condition after the accident were taken to the hospital at Doka but that the wife later died.

Kaduna State Sector Commander of the Federal Road Safety Commission (FRSC), Mr. Francis Udoma, also told our correspondent that “The driver, the chief detail, the orderly and the P.A (Personal Assistant) were injured.”

President Buhari in his condolence message expressed shock and sadness at the death of Barrister James Ocholi.

The Senior Special Assistant to the President on Media and Publicity, Garba Shehu, said in a statement last night that Buhari described Ocholi's death as untimely.

The presidential spokesman said Buhari regretted that Nigeria had lost a key component of the change agenda.

“Barrister Ocholi was an accomplished and patriotic Nigerian, who was keen to accept the call to service at a time his country needed him”, the president was quoted as saying.

Buhari said in the few months he had been in office, the late minister had begun to distinguish himself through his commitment and dedication to his portfolio.

The presidential aide said the late Ocholi had a long record of political association with President Buhari.

Shehu said President Buhari also condoled with the government and people of Kogi State for “having lost a distinguished and irreplaceable son”.

He said the president prayed that God comfort the bereaved and grant them the grace to bear the loss.

“The entire country mourns the loss of this great man who has sadly left us when we need him most”, the president said.

Shehu said Buhari had also sent the Secretary to the Government of the Federation, Babachir David Lawal, “to formally convey the news to members of the deceased family as well as parishioners in his place of worship.”

Ocholi was a long time ally of President Buhari. He contested the Kogi governorship election in 2011 under the platform of the Congress for Progressives Change (CPC).

He was a member of the 17-man committee appointed by CPC that represented the party in the proposed merger of major opposition parties that formed the All Progressives Congress (APC).

Before his appointment as Minister of State for Labour and Employment late last year, he also served as deputy national legal adviser of APC.

The governor in a statement issued yesterday by his Special Adviser on Media and Strategy, Abdulmalik Abdulkarim, described the late Ocholi as a 'pragmatic, dynamic, humane and brilliant law officer, who was known around the world.'

He said the late minister was one of the most unswerving constitutional lawyers Nigeria has ever produced.

Bello recalled how the late Senior Advocate of Nigeria joined other progressive minded individuals around the country to build the pillars of the All Progressives Congress (APC).

He further stated that the late minister was a detribalized Nigerian who believed in the oneness of the nation, summing up his death as an irreparable loss to Kogi State and the Nation at large.

The governor condoled with members of his family over the loss of late Ocholi and prayed for repose of the soul.

A close family friend, Attai Uwodi, described the incident as shocking and devastating.

He said the incident had left them speechless and in utter disbelief, adding that they had left everything to God.

The APC National Secretary of the All Progressives Congress (APC), Mai Mala Buni, described the death of Ocholi as a monumental loss.

In a condolence message Sunday, Buni prayed for the recovery of others involved in the accident, including the late minister's driver who reportedly sustained serious injuries.

The APC National Secretary said the late Ocholi, who was the party's former Deputy National Legal Adviser, would be remembered for his selfless service to the country.

While extending his condolences to the people and government of Kogi State, Buni prayed to Almighty God to grant Ocholi's immediate family the fortitude to bear the loss.

NLC president commiserates with Buhari
The president of Nigeria Labour Congress, (NLC), Comrade Ayubba Wabba has commiserated with President Muhammadu Buhari over the death of the minister.

Speaking to Daily Trust on phone yesterday, Wabba described the late minister as a reliable and dependable person who used his legal background to ensure industrial peace and harmony in workplaces.

He said his death was a great loss to the present administration, labour force and Nigeria at large.

The NLC president said he had earlier called his counterpart minister, Chris Ngige who confirmed to him that Ocholi had lost his live in the accident.

“We enjoyed working with him because he added value to governance and contributed immensely in ensuring that the national health workers' issues were amicably resolved. We will surely miss him for his commitment to the present administration's core values. His demise has indeed created a great vacuum,” Wabba said.

The FRSC said yesterday that the remains of the late Minister of State had been deposited at the morgue of the National Hospital, Abuja.

Mr Bisi Kazeem, the spokesperson of the FRSC, confirmed in Abuja that the corpse was taken to the hospital along with two other casualties.

“The minister and two other occupants died eventually, while four people were injured,'' said the spokesman.

However, Kazeem did not give details of the other victims of the crash. (NAN/ Daily Trust)