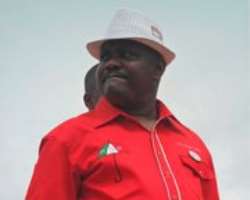 The Committee for the Protection of Peoples Mandate (CPPM) condemns in strong and unmistakable terms, a recent statement credited to Governor Nyesom Wike of Rivers state as published in (The Punch newspaper of Saturday 5th March, 2016) asking “All political appointees and leaders of the Peoples Democratic Party in the state to resist any form of arrest by security agents on trumped up charges”.

We regard this statement which emanated from the office of an executive governor of a state who swore on oath to abide by the constitution as barbaric, crude, irresponsible, provocative, inciting, reckless, invitation to anarchy and unbecoming of the occupant of the exalted seat of governor of a state in the Federal Republic of Nigeria.

This call for violence by Mr. Nyesom Wike should be seen as an act of desperation and intimidation against the security agencies who are constitutionally empowered to ensure public safety and order through the arrest or invitation of any person or group of persons for questioning or for acts deemed as threat to the constitution.

However, we are not surprised by Mr. Nyesom Wike’s reckless call for violation of the constitution by his appointees and party members in the run up to the rerun elections in the state in view of his past utterances and actions which is a threat to national security, democracy, public order and safety and has manifested in Rivers state becoming the hotbed of violence in the federal Republic of Nigeria before, during and after the conduct of the 2015 general elections, till date.

Mr. Wike by this call for breakdown of law and order has shown that he has no respect for the fundamental rights of the people of Rivers state and the constitution of the Federal Republic of Nigeria and is determined go to any length to violate the constitution, so long as it doesn’t align with his whims and caprices.

We want it placed on record that Mr. Nyesom Wike by this irresponsible statement has entered the record books as the first elected governor since the return to democratic rule in 1999 in Nigeria to publicly call for a breakdown of law and order and a violation of the constitution.

We wish to use this medium to alert Nigerians and the whole world that Mr. Nyesom Wike by this barbaric statement of call for anarchy has shown that civility and respect for the constitution which is one of the tenets of democracy is immaterial and irrelevant and so, he should be personally held responsible for any breakdown of law and order before, during and after the rerun elections in Rivers state.

We hereby call on the President of the Federal Republic of Nigeria to immediately order the security agencies to place Mr. Nyesom Wike, the executive governor of Rivers state under security surveillance because of his constant threat to national security, democracy and the constitution as an advocate and sponsor of violence.