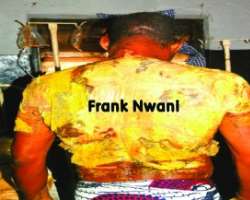 A 35-year-old housewife in Ibusa, Oshimili South Local Government Area of Delta State has bathed her husband Frank Nwani with hot water, for allegedly denying her of sex for three weeks.

Awele Nwani, a mother of six, now on the run, alleged that her husband was having sexual affairs outside and thus threatened to make life unbearable for him.

But the husband dispelled her allegation as untrue, saying his wife took laws into her hands.

'My wife has been sleeping around, hence I stopped sleeping with her for three weeks, it is a taboo in my tribe and she violates the laws,' the husband said.

to starve her of sex.
Trouble started last Thursday when Frank returned home from a friend's house during the night and jokingly called his wife a lazy woman. This left the woman in rage as she fired back, calling the husband a witch. The ensuing argument degenerated into a verbal crossfire that further resulted in a shouting match.

Sources said after the quarrel, the woman pretended as if she was no longer angry. However, she dashed to the kitchen where water was already boiled and unknown to the husband who was relaxing in the parlour, bathed him with the water and disappeared.

Police officers at the Ibusa police Division who did not want their names in the print, confirmed that the woman disappeared with the N200,000 daily contributions the husband received and kept in her custody.

The police said they were on the trail of the suspect, while the victim is presently receiving treatment in a private hospital.