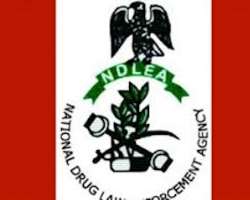 Operatives of the National Drug Law Enforcement Agency (NDLEA) at the Murtala Muhammed International Airport (MMIA) Lagos have arrested an exporter and three clearing agents in connection with unlawful exportation of illicit drugs out of the country.

The seized drugs weighing 54.76kg include 24.7kg of methamphetamine disguised as artificial hair, 2.810kg of cocaine concealed in foodstuff and 27.250kg of diazepam.

The seized drugs have a street value of two hundred and twenty-two million naira.

Chairman and Chief Executive of the NDLEA Muhammad Mustapha Abdallah in his reaction to the harvest of arrests said that the Agency has recorded impressive success in prosecuting drug traffickers.

'Anyone whose action contravenes the NDLEA Act shall not escape justice. Many traffickers have been successfully convicted at the law courts by the Agency. Clearing agents are liable under the law when narcotic drugs are traced to their shipments.

'They therefore have a responsibility to know their customers and produce them on request. It is pertinent for them to take necessary measures in preventing their consignment from being used in smuggling narcotic drugs. Investigations into the cases have commenced and more arrests are in the offing,' Abdallah assured.

'Preliminary investigation has shown that two of the clearing agents, Akpan Jacob and Nwaeyizia Chibuzor Sylvester conspired to export 24.7kg of methamphetamine. Another agent, Ndafia Mike had 50 packs each of diazepam tablets and injections while an exporter, Orji Sunday Otuu was found in possession of 2.810kg of cocaine. We are leaving no stone unturned in improving the operational activities of the command,' Garba stated.

Akpan who is married with five children said that he agreed to take the job because of financial difficulties.

'I am from Akwa Ibom State and I work as a clearing agent. I was given this job by another clearing agent, Sylvester. Ordinarily, I would not have accepted the job but I had no choice because of my family problems,' he stated.

On his part, Sylvester told officials that Akpan was the one that mounted pressure on him to do the job.

In his words, 'I was never interested in this job but the pressure from Akpan was too much so I gave him the job. I also gave him one hundred thousand naira (â‚¦100,000) before my arrest'.

He hails from Delta State.
Odofia Mike in his statement said that he was called to pick up the bag and send it to Guinea Conakry.

'A customer called me to collect a bag at the motor park. I collected it and went to the airport but during examination, some injections and tablets of diazepam were found inside the bag. This was how I was arrested. I have no idea that there are injections there,' Odofia stated.

Orji Sunday Otuu who exports foodstuff to India was found to have hidden 2.810kg of cocaine inside foodstuff.  'I used to export African foodstuff and spices to India. This time around, I was tempted to hide cocaine inside the foodstuff. I had wanted to make about ten million naira profit but things did not go according to my plan,' Orji lamented.

The suspects will soon be charged to court.