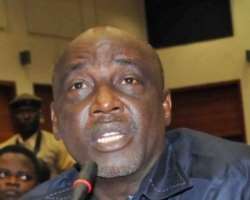 Former Minister of Interior, Comrade Abba Moro was on Thursday granted bail by a Federal High Court in Abuja.

Comrade Moro and others were accused by the EFCC of defrauding graduate applicants to the tune of N675million in the botched March 15, 2014 Nigerian Immigration Service, NIS recruitment exercise.

Justice Anwuli Chikere granted bail to Moro on self-recognition, but imposed on the two others bail sum of N100 million each with one surety in like sum.

All the accused persons, including Moro are, however, to deposit their passports and other travel documents with the court Registrar throughout the period of their trial.

Before the ruling, Mr Moro had been remanded in prison custody pending the determination of his application for bail.

While delivering her ruling, Justice A I Chikere held that Moro had no criminal record and was a public officer, hence she believed that he would not jump bail. After her ruling, she fixed April 27 for commencement of trial.