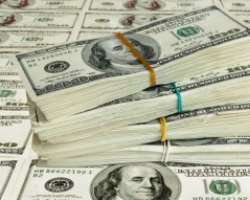 The Central Bank of Nigeria (CBN) on Thursday raised the alarm that about $20bn (N3.94tn) was lying idle in different domiciliary accounts of the citizens.

The Deputy Governor, Financial System Surveillance, CBN, Dr. Joseph Nnana, stated this during a meeting of the Joint Appropriation Committees of the National Assembly with government officials on the 2016 budget.

Nnana said, 'Distinguished chairman sir, we have $20bn lying idle in various domiciliary accounts of many customers at the various banks across the country.

'This is part of the reasons why the naira has continued to slide against the US dollar.'

He alleged that some privileged Nigerians were behind the consistent slide in the value of the naira by embarking on dollar speculation to the detriment of the local currency.

The CBN deputy governor, however, expressed the hope that the passage of the 2016 budget would put a stop to the unrestrained drop in the value of the naira.

He said, 'The CBN will embark on aggressive liquidity mop-up to enable the naira regain confidence. The CBN will not sit down and watch the consistent fall of the naira. After the passage of the 2016 budget, the naira will begin to bounce back.

'Those who speculate on dollars will have their fingers burnt.'

In her submission, the Minister of Finance, Mrs. Kemi Adeosun, told the gathering that the amount in the Treasury Single Account had risen to N2.9tn.

Adeosun explained that the money in the TSA was not meant to fund the budget contrary to a general impression.

She said that the money belonged to different agencies of government, which had the right to access the funds.

Her explanation was against suggestions by the legislators that the Federal Government should use the TSA to fund the 2016 budget amidst liquidity problem arising from the slump in global crude oil prices.

Adeosun said all the Ministries, Departments and Agencies of the government had their monies transferred into the TSA and should have access to them.

She said that the government had commenced the training of its personnel on the operation of the TSA such that any agency of government that needed its share of the funds in the account would not find it difficult accessing it.

The Chairman of the Joint National Assembly Committee on Appropriation, Senator Danjuma Goje, asked the executive to consider the postponement of the Special Intervention Programme till next year.

He argued that the implementation of N500bn intervention fund contained in 2016 budget proposals would not be feasible since there were no clear implementation strategies.

Goje said the explanations being offered by government officials about the implementation strategy for the programme were not satisfactory.

He said, 'There is no detailed and clear-cut structure being laid down for implementation of this project because what we have in this budget is N300bn recurrent and N200bn capital. We had to push hard yesterday to get some details, which are not convincing. For instance, the explanation we got is that N5,000 will be given to one million Nigerians.

'Who will choose the one million people? What structures do you have in place to make sure that you choose the right people?

'You want to give money to about one million market women or there about, and in my place we do not have many market women; how will you choose the market women to represent all interests? We have not had clear explanations on the numerous issues surrounding the implementation of this programme.

'Even the afternoon school feeding contained in the budget is not feasible, because some students study under non-conducive environment. Will feeding them enhance their learning?'

Goje said while the National Assembly was in support of the programme, implementing it this year might not be feasible.

He, therefore, suggested that the money allocated to it should be added to the allocations for sectors like power, transport and health, while those responsible for its implementation should map out better strategy for it in 2017.

But the Minister of Budget and National Planning, Udo Udoma, said the special intervention programme was a political commitment, which the President Muhammadu Buhari administration would not hesitate to fulfil.

He promised to meet with relevant stakeholders to discuss on better strategies for its implementation.