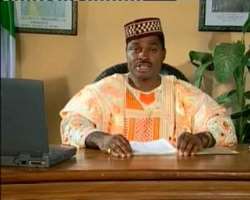 Actress, Chioma Toplis and the former 'wife' of actor, Kenneth Okonkwo popularly known as Andy, are really at war over a handbag.Speaking to Life and Beat on the phone recently, Chioma said Nancy was a chronic debtor who bought a handbag from her and has refused to pay her for it.

”I never knew who this Nancy was. It is just that she likes making friends with people in the movie industry. She always wants to be associated with us. She invited me for her birthday and I didn't go. I was on my way to my customer's house when I decided to go to Nancy's house and apologise for not coming for her birthday,”she said.

According to Chioma, while she was in Nancy's house her friend called to remind her that she was waiting for the bags to be brought to her house.

”That was how Nancy got to know that I sell bags. She wanted to see my goods. I showed her and she picked up one. I told her the prize was 35,000 Naira and she promised she was going to pay the money the following day,”she went on.

Chioma said that was the last she heard from Nancy. According to her, she sent Nancy text messages reminding her to pay her debts, but she failed to do so. Chioma claimed she sent her sister to Nancy to collect the money, yet Nancy did not pay up.

Chioma said Nancy eventually paid 15, 000 Naira out of the money and she has been calling her names since then. She said, ”I don't care what she calls me. I married a white man who does not read the papers or even watch Nigerian movies. He does not care what is written or said about me because he knows the kind of woman he married. This is the third time Nancy is getting married. God knows why she is not able to stay in a husband's house.”

Life and Beat called Nancy's phone numbers to get her own side of the story, but a female voice who identified herself as 'Sarah', answered the call and claimed Nancy was not around.

Our correspondent told her the reason why she was calling Nancy and Sarah said she would relay the message to Nancy.

Shortly, Sarah called Life and Beat and claimed she was actually the one that bought the bag from Chioma and not Nancy.

”Nancy is my sister. She does not have anything to do with Chioma. I was the one that bought the bag from Chioma. We agreed that her money was 15, 000 naira and I have paid her the money,”she said.

When asked why it took her long to pay the money she said, ”Chioma slept with my boyfriend. She is a slut. She claimed she is married yet she is sleeping around. Initially, I had wanted her to take the money my boyfriend gave her as part of the money I was owing her before my sister advised me to go and pay her. I have paid her. Even if I was owing her, is that enough reason for her to go to the press? She is a disgrace.”