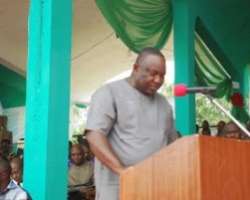 Hackers have broken into the cell phone of Governor Ifeanyi Ugwanyi of Enugu State, as he issues a  caveat emptor.

In a statement in. Enugu Wednesday night, the Chief Press Secretary to the governor, Mr Uwakwe Abugu, said the act was perpetrated by unknown persons.

He said, said, “This afternoon, (yesterday, March 2, 2016), the Airtel cell phone number of His Excellency, Hon. Ifeanyi Ugwuanyi … was hacked into by unknown persons for suspected fraudulent activities.

“This is therefore, to hereby, draw the attention of members of the public, especially those who have been reached or contacted by the suspected fraudsters and to urge them to totally disregard any communication extended to them through that cell phone number purporting to have emanated from His Excellency, the governor.

“Relevant security agencies have been appropriately contacted to investigate the unfortunate incident and, accordingly, track down the perpetrators of the scam.”