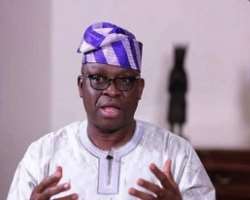 Ekiti State Government in conjunction with some banks, will build an artisans' village along Ikere Road, Ado-Ekiti, Governor Ayodele Fayose has said.

He made the disclosure Wednesday in Ado-Ekiti while meeting with artisans and members of the Nigerian Automobile Technicians Association (NATA) at the Jibowu Hall, Government House, Ado-Ekiti.

A statement made available to newsmen in Ado-Ekiti on Wednesday by the governor's Chief Press Secretary, Mr Idowu Adelusi, said the project would cost the state government about N200 million.

The meeting according findings was called to resolve the dispute between Ekiti Artisans' Association and NATA over the parcel of land the proposed village would be built.It was resolved at the meeting that a committee be set up to find ways the two unions could work together.

In his plea before the governor, the Ekiti State Chairman of NATA, Alo Babatunde, said the land was allocated to them by the state government during the first tenure of Fayose about 10 years ago, and that the National Automotive Council had concluded plans to build an automotive centre for them on the land.

He said members of his association were surprised to hear that the other group had gone there early this year to clear the land for another purpose. The chairman of the artisans' group, Mr Julius Adu, said Governor Fayose promised them a land for their village last year and that state officials showed them the place.

In his intervention speech, Fayose thanked both sides for maintaining peace and not taking the law into their hands over the matter. The governor added that while the state government would continue to cater for the welfare of civil servants, it would not neglect those in the informal sector who constitute the majority.