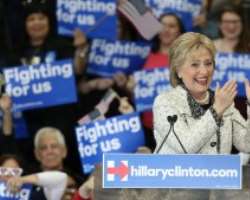 Hilary Clinton trounced her rival Bernie Sanders in South Carolina on Saturday, her second decisive win in a week as she heads into Super Tuesday.

“Tomorrow, this campaign goes national,” Clinton said to a fired-up crowd at the volleyball court in the University of South Carolina.

Her speech was largely aimed at GOP frontrunner Donald Trump, as if she were already the nominee making a general election pitch. “We don't need to make America great again. America never stopped being great,” she said. “Instead of building walls, we need to be tearing down barriers.”

She quoted Scripture and asked for more “love and kindness,” in an effort to distinguish herself from Trump.

The win dims Sanders' prospects but at the same time makes it even more urgent for Clinton to appeal to his supporters, a passionate part of the Democratic base she can ill-afford to alienate before the general election.

Clinton campaigned hard in the state, drawing large, mostly African-American crowds to town halls and rallies across South Carolina. (ABC exit polling showed that Clinton won 84 percent of the black vote.) She stressed her personal commitment to the state, which she first visited as a young lawyer fighting against a system that sent juveniles to adult jails, and slammed Sanders on gun control in particular. She campaigned with African-American mothers whose children were killed by police or as a result of gun violence, and made reforming the criminal justice system and ending “systemic racism” a centerpiece of her stump speech. (Read more by Liz Goodwin/Yahoo News)