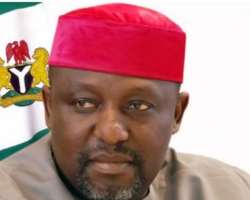 A frontline pro democracy civil society watchdog in Imo State known as Imo Bilie Initiative for Good Governance (IBIN) has written the Imo state government led by Governor Rochas Okorocha demanding the details of the recently acquired bailout loan by the state from the Federal Government and also details of the construction of 27 hospitals constructed by the administration.

In separate letters addressed to the various responsible government organs through their lawyer Barr Chijioke Emenalo of Alpha Juris Consult Chambers, the group sought to know the following concerning the bailout loan, the condition for which the loan was requested, the amount approved for the state, the amount accessed so far and how the accessed fund was appropriated, while in the case of the construction27 hospitals they demanded for evidence showing where the project for the construction of the 27 hospitals was captured in the budget, how much was allocated to the project, evidence of bidding as contained in the procurement act, the bill of quantity, names of contractors for each of the hospitals, amount appropriated on each and the extent of work done on each hospital.

The letter urged the government to provide the group with the demanded information within 14 days to enable them clearly know if the government is living up to the mandate given to her by Imo people. Meanwhile while chatting with media correspondents on the letter, the leader of the group Comrade Aku Obidinma (Abdul) said the demand has become necessary following the alarming rate at which governance is becoming secret and deceptive in the state. He decried the waste of scarce resources by the government on irrelevant and white elephant projects that has no direct positive impact on the living condition of the people.

Comrade Aku said with the number of substandard and incomplete projects littered across the state, it has become imperative that Imo people wake up from their slumber and question the government on how they are governed. He said the present action is only the beginning of many questions that the people will be asking the government, while vowing that Imo Bilie Initiative For Good Governance will henceforth ensure that no government or public official takes Imo people for granted anymore through her "Vigilant Citizen Project" that will be launched sonnets in the State. He however assured of IBIN readiness to explore all legal options to ensure that the government is made unaccountable to the people.