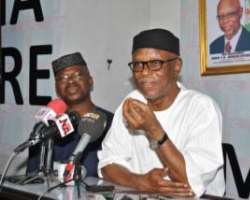 The National Chairman of the All Progressives Congress (APC), Chief John Odigie-Oyegun on Friday disclosed that he will take a 10-day break starting Monday 29th February, 2016 to enable him rest.

‎
‎
In a chat with APC correspondents, he stated that in his absence,‎ the party's Deputy National Chairman (South), Engr. Segun Oni ‎will cover his beat.

‎
‎He dispelled a media report suggesting an "internal strife" in the party and a move to "ease" him out of office.

‎
Below is the excerpts from the media chat:
‎
‎
‎
Odigie-Oyegun's opening remarks -
‎
I have been APC National Chairman for how long now? Going to two years, and it has been a very intense period building the party and a very intense period putting government together up to this point. All that has happened is that I think I deserve a bit of a break and that will start effective Monday.

In my absence, the party's Deputy National Chairman (South), Engr. Segun Oni will cover my beat. It is that simple, it is that straightforward. Any speculation about not being in the office is of no consequence.

On Tuesday I was down with malaria, I managed on Wednesday to attend that crucial meeting at the presidency, yesterday (Thursday) I had to go to the hospital just to be sure and today I am at work, full stop. So please, please, please I know the press is supposed to be imaginative and steer the news but not when there is really nothing to steer. It is that simple.

How long is the break?‎
‎
Ten working days (two weeks). So if you start counting from Monday, you should know when I'll be back. The meeting on Wednesday bothered on such important national issues, chairman or no chairman position has nothing to do with such serious national issues of national importance, which a very serious and select group like that was put together to address so nothing as mundane as whether the future of the chairman is in doubt or not.‎

‎
‎As a matter of fact it was most funny that whilst the meeting was on, the social media was already agog with exactly what you just mentioned and somebody read it to us right at the meeting and everyone had a good laugh and that was the end of the matter. Like I said there are serious issues of national importance and that group is one of the most select in the party. It is a group that brings all aspects of government and party at the highest level together so you can infact guess the kind of things that they will be addressing not things as mundane as who is apologizing to who. When eventually some of the issues reach the stage that we have answers, we do not want to call the press and say look, we have these questions and we are trying to work out answers. We'll work on the answers and at the proper time the appropriate person will brief the press.‎

‎
When will the APC Board of Trustees be constituted?

‎
Will there be replacement of officers at NEC?
The constitution provides the methodology for that and we have to have congresses all over in the interim to fill these vacancies. And the issue that was raised about filling the vacancy left by the exit of Lai Mohammed. You can understand the problem of replacing a man of the performance level of Lai Mohammed so we are still looking. If any of you are very interested you let us know so long as you can match the performance of Lai Mohammed.

‎
It's been almost 9 months since the APC took over government at the federal level, when are Nigerians seeing results?

‎
I do not see how anybody can give you a date but very soon. I have no doubts at all. The president knows what our national issues are, he knows that a lot of it has international connotations. A group of the World is fighting to be the most highly industrialized. China wants cheap oil because it's a manufacturing hub, India wants cheap oil and a lot of other countries want cheap oil which of course is contrary to our own interest because we want good prices for oil so that we can carry on with our own national development plans. So that is only the tip of the iceberg of what Mr president is doing, trying to talk to those who have an impact in rearranging the international economic realities to change some of the current dynamics that is making oil collapse in such a precipitate manner.

‎
On the president's trips abroad
‎
We want to plead with the press we cannot totally on our own solve our problems, the world is a global village, everybody now knows that, everybody trumpets it and since we are in a bit of a bind now, thanks to forces not totally within our control, we must talk to others, who would have a role to play in helping you out of your present issues and problems. So that is where we are we need a lot of investment, we need a lot of infrastructural upgrading and you would be surprised that very soon, particularly in the field of infrastructure some of what Mr. President has been travelling about putting together, would become manifest, because these projects would start the process of implementation and they would bring smiles to the faces of Nigerians.

‎
Some of the last trips especially the ones to the Middle East countries have had to do with oil and you read some of it in papers that we have to do something to shore up the prices of crude worldwide, because the minutes we allow things to drop to the point that what you get paid become less than what you invest in, producing it, then we have real serious issues. So Mr. President. is doing a fanstatic job. It is not building an estate or things you can see visually and physically, but it is building and rebuilding the cracked foundation of our nation Nigeria. Please let's understand that is what is going on. Let's understand because he (Buhari) is the best salesman internationally for this nation.

‎
‎On claims by the PDP of a plot to gag the opposition.

‎
Well, from whom did the PDP Chairman, Uche Secondus collect the gift? Was it from a corporate entity or from an individual? If it's from the government coffers, if its, its public funds. If a corporate entity decided to support a party or an individual that is corporate, that is private that is totally the individual's decisions subject of course to the limit in the constitution and what the electoral Act provide. I think is that straight forward. Look, I don't know how often we will repeat this, we have a major. problem with corruption, it is what has crippled this nation and if you are cutting down a tree where. Ever its falls so be it. If he happens to be a participant so be it, the colour, the party, ethnic group or whatever as. you can see just does not matter anymore. So, I don't know how else to explain that. In sixteen years, this is the first progressive,actively anti-corruption government that this nation has had so if the results are the way they are, I mean, did you expect anything different, I don't know unless somebody is wiser here and we will like to share from your wisdom because it could improved the way that we do things, if we are investigating corruption, where else except those who have participated in government and in the process, eh I don't know, please enlighten me if there is other way to look at it and then we will go and give it a thought

‎
‎
All I can tell you is that, they are going to be Federal Programme, they have been actively worked upon, but they are going to be implemented without doubt with the active participation with the state governments who would also have to put in something in the process in terms of resources. These programmes are real and not only real, we have the support of UN and various agencies like the Bill Gate Foundation are all going to participate, so it's all the matter of time, we are talking of months not years when these programmes would swing into action more than that, I cannot say now because I don't want to still ponder on the other relevant agencies be the ones to unveil their action plans, their implementation plan at the appropriate time, but I can assure you that they have been actively worked upon with very intense international participation