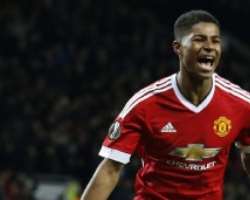 Manchester: Louis van Gaal has upset plenty of Manchester United fans already this season and may do so again by resisting calls for teenager Marcus Rashford to start against title-chasing Arsenal in the Premier League on Sunday.

The 18-year-old Rashford had a dream senior debut on Thursday when, thrust in after Anthony Martial was injured in the warm-up, the striker responded by scoring twice in a 5-1 win over Danish side FC Midtjylland as United overcame a first leg deficit for a 6-3 aggregate success in their last 32 Europa League tie.

Such was Rashford`s display, and United`s injury crisis, there were those who said he should remain in the first team for Arsenal`s visit to Old Trafford this weekend.

But veteran Dutch manager van Gaal, who has come under fire this season for adopting a defensive style at odds with United`s attacking tradition, advised caution.

“No, he shall not play,” said the United manager of talk Rashford might start against Arsenal.

“He can come off the bench maybe. I cannot risk it. I`m a long-term coach.”

First-choice goalkeeper David de Gea is expected back against the Gunners, but Martial remains more of a doubt.

“I don`t know about Anthony Martial,” van Gaal said. “I have talked with him and the physiotherapist, but I cannot say. The problem is not as heavy as everybody thinks. But you never know.”

United remain without a long list of injured players, including captain Wayne Rooney, who has a knee problem, but defender Chris Smalling has a chance of recovering from a shoulder injury in time to face Arsenal, while left-back Marcos Rojo is likely to be in the squad too.

Rojo played the final 11 minutes against Midtjylland, his first appearance since late November after recovering from shoulder surgery.

Meanwhile Arsenal manager Arsene Wenger has revealed that Alex Oxlade-Chamberlain is set to miss a significant period of his side`s run in following a knee injury suffered in the 2-0 Champions League defeat by Barcelona at the Emirates on Tuesday.

The England forward could be out for up to seven weeks with the problem, sustained in a challenge with Javier Mascherano, but Wenger was confident he will be available for Euro 2016.

“We lost Oxlade-Chamberlain on Tuesday night,” he said. “His injury is quite serious and keeps him out for a few weeks. He is consulting a specialist at the moment because he is injured at his knee. Hopefully we will have good news. He is out for a few weeks.

“How long exactly? I don`t know but a few weeks.

“I don`t think he will miss Euro 2016,” the veteran French boss added. “He is seeing a specialist now.

“It`s not (a recurrence of a previous injury). Not at all. It`s a new injury.

“He is devastated. Let`s hope that we get good news that it`s only two or three weeks, not six or seven.”

Wenger, whose side could end the weekend top of the table if they win on Sunday and other results fall their way, refused to answer questions over whether England forward Danny Welbeck will earn a first league start of the season against former club United.

Arsenal could do with a boost up front after failing to score in five of their last eight matches and Wenger said of Welbeck: “He is still in the squad and he is not completely over his knee problem.

“”He has done really well and is very fit. I have to analyse that.”