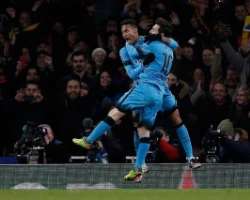 Messi left  Arsenal spellbound as the Barcelona striker’s clinical double sealed a 2-0 last 16, first leg victory that put the Champions League holders firmly on course for the quarter-finals on Tuesday.

Barca coach Luis Enrique joked this week that all he needed to do was shout ‘Abracadabra’ for Messi, Neymar and Luis Suarez to deliver the kind of magic display that would bewilder the Gunners.

On this occasion, it was Messi who answered his coach’s call with a second-half brace as the Spanish champions survived a stern examination from Arsene Wenger’s side to escape the Emirates Stadium with a result likely to condemn the hosts to a sixth successive last-16 exit.

The leaders of La Liga, chasing a sixth European Cup triumph, are now unbeaten in 33 games in all competitions — a blistering streak that includes 14 wins from their last 15 games.

After being dazzled by Messi’s magic wand, it will take an act of astonishing escapology for Arsenal to go through in the return leg at the Camp Nou on March 16.

“I liked everything about us today from the very beginning,” Luis Enrique said. “I liked the way we scored and we had plenty of possession.

“Our opponent defended with every player in their own half but we still managed to hamper them.”

Wenger added: “Barcelona is a great team. The regret I had was we looked like we could dominate the game, then we give the goal away.

“Realistically it is very, very difficult, if not impossible (to make the quarter-finals).”

Aware that Arsenal’s refusal to curb their attacking instincts had left them fatally vulnerable in the Champions League knockout stages, Wenger set out to stifle Barca with a cautious game-plan. Nacho Monreal had clearly taken Wenger’s words to heart and he earned an early booking for chopping down Ivan Rakitic .

But there was more than just mindless muscle to Arsenal’s approach.

Aaron Ramsey sent Mesut Ozil clear down the left edge of the penalty area with an exquisite backheel and then raced onto the German’s return pass for a powerful shot that was blocked by the visitors.

But with half-time looming, Barca, refusing to be hounded out of their stride, finally escaped Wenger’s tactical straitjacket.

An opening goal should have followed when Dani Alves met Sergio Busquets ‘ pass with a volleyed cross that Suarez headed wide with only Petr Cech to beat.

Completely anonymous in the first half, Neymar underlined Barca’s renewed sense of purpose immediately after the interval with a surging run past Bellerin onto Andres Iniesta ‘s astute pass.

The Brazilian should really have scored, but Cech came to Arsenal’s rescue as he raced off his line to save.

Olivier Giroud rose above the Barca defence to meet Ozil’s cross with a header that ter Stegen brilliantly clawed away. But Luis Enrique’s men were irrepressible and Suarez drilled narrowly wide of both Neymar and the far post.

Messi had never scored against Cech in six encounters with the Arsenal goalkeeper during his time at Chelsea .

But the Argentine did have six goals in his four meetings with Arsenal and he extended his mastery over the Gunners in the 71st minute.

In the blink of an eye, Neymar turned defence into attack as he seized on a clearance, flicked a pass to Suarez on the left and sprinted onto the return ball.

For virtually the first time all night, Arsenal had left themselves exposed and Neymar slipped a pass to Messi, who was left all alone to plant an emphatic finish past Cech.

Suarez should have doubled the visitors’ lead soon after, but the former Liverpool striker hit the post when it seemed easier to score.

It mattered little as Arsenal sealed their own fate in the 84th minute when substitute Mathieu Flamini , exposed by Per Mertesacker’s sloppy clearance, conceded a penalty with a crude challenge on Messi, who picked himself up to slot home from the spot