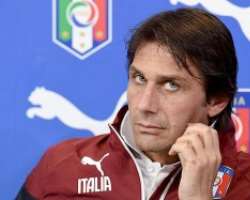 Antonio Conte will be the next manager of Chelsea, according to a Gazzetta dello Sportreport.

Currently the manager of the Italian national team, the 46-year-old is expected to take charge of the Premier League giant at the conclusion of this summer's European Championship. The agreement between the two sides is said to only need Chelsea owner Roman Abramovich's final approval before being finalized and formally announced.

Before taking the Italian job, Conte spent three seasons in charge of Serie A side Juventus where he would lead the La Vecchia Signora (the Old Lady) back to domestic and European prominence, including three-straight Serie A titles from 2012-2014 (Juve have since gone on to win another in 2015 and currently lead the race for the 2016 title).

Should Conte be named the new Chelsea boss, he will have beaten fellow reported candidates Diego Simeone and  Massimiliano Allegri to the job.

As is the case with any new manager at a club the size (and riches) of Chelsea, there will be a fair bit of turnover in the summer transfer window, with Conte eager to build his own Chelsea. The first name sure to be on that list? Juve superstar Paul Pogba.