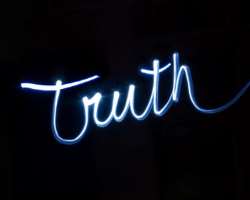 Lie brings doubt, ruins relationships, shakes faith and elicits calamity. In other words, lie is synonymous to evil –things that bring harm or discomfort. But if we only stick to the negativities about lie, then we are simply being unfair in our judgment.

Men lie for diverse reasons: to deceive, to avoid responsibilities or punishment, for peace, to ease tension, to motivate, to protect heritage or beliefs. Men also lie to protect truths. So, lie exists on a neutral ground, why we employ them is what defines its being good or bad. Good lies are told either for the betterment of the subjects or to help one win a personal unselfish goal while bad lies are told either to harm or for selfish interests.

To understand the vital roles good lies play in our lives, we need understand the human system first. Men are basically attracted to and bettered by things that bring them pleasure. Also, men are principally influenced by their senses, that is, what they see, taste, smell, feel or hear. Consequently, men are affected both positively and negatively by what they hear. For example, an abusive statement provokes, while an apology revokes anger.

In as much as people are affected positively by truths, it is crucial to understand that some truths can be evil. But lie is an art for the wise and an imperative tool for manipulating fatal truths for the good of their subjects. For instance, a woman suffering from a cardiac disease might die of shock if she is told that her husband just died in a fatal accident. It’s a fact; her husband is dead, but it does not help to break it to her as it is.

To help the situation, one could employ intelligence in the form of a lie. If she gets the message that her husband ‘had a minor accident’ and that he has been taken to a hospital when actually, he is in a mortuary; you are saving her by regulating the shock with lies. In this case, lie is necessary.

To further illustrate, when people from different parts of the world complained about weird flying devices and strange abductions, it raised tension. But the tension would have been petty when compared to the feeling that would have surfaced if the government after their investigations had stated that the devices were alien machines. That would have led to distress; people would have felt insecure which would have resulted in commotion and lasting negative effects on the people. So even if the government’s dismissal of the UFOs and their abductions as rumors were lies; they were good ones, though.

To avoid the negative effects of truths, sometimes, lies become a necessity. Sadly, some people condemn lies totally. But such people seem more like deceivers for a saying goes that “an average person tells four lies a day... The most common lie is: I’m fine”; though I think an average person tells more. So, a person who says he or she does not lie is simply growing lies.

A good Lie is necessary, but it requires utmost care to convey because a lie can pull down a castle of truths.

In sum, before condemning a lie, we should try and understand its purpose because that is what determines its being good or bad.