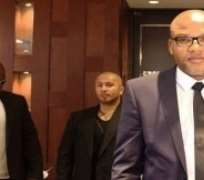 The federal government has asked a Federal High Court sitting in Abuja to protect its witnesses from the public during the trial of the self-proclaimed leader of the Indigenous People of Biafra, Nnamdi Kanu.

This prayer was made by the counsel to the government, David Kaswe when he told the court that the application is pursuant to the fact that the prosecution witnesses many of whom reside in the geographical entity of the accused persons, have said they will not be willing to testify unless they are assured of their security.

He went on to say that most of the witnesses categorically informed his team that unless they can be guaranteed some form of protection by the court, they will not testify.

In his bid to persuading the court, Mr. David further told the trial judge, Justice James Tsoho that the case of the prosecution will be greatly frustrated in the event, if his clients witnesses are not protected and refuse to attend the proceedings to testify .

Declaring his objection to the application, Counsel to the accused persons, Chief Chuks Muoma SAN urged the court to discountenance the application as it lacks merit .

He frowned at the request for secret trial by the prosecutor, saying that it cannot accuse his clients in public and seek to try them in secret.

Muoma vehemently opposed the application which he said grossly lacked merit. He argued that section 36(4) of the 1999 constitution made no provision for masquerades to testify in a trial ‎involving an alleged act of treason.

“An accused person under our jurisprudence and justice ad‎ministration must be confronted with his accusers eye-ball to eye-ball. “My lord we operate an accusatorial‎ system of procedure under the common law. Justice must not only be done but must be seen to have been done. “It is not within common sense to malign and accuse someone in public and apply to try him in the bedroom. Having been accused in public we want to also be tried in public. “We therefore urge this court not to allow masquerades to testify before it. We want to see their faces and ask them questions. As masquerades, how will the court be able to gauge their demeanour and body language? Is it by the rhythm of their dance steps? “The tenets of justice outweigh this application and we urge my lord to reject it. It has no merit whatsoever. Secret trial is for terrorism charge, it is not for the type of offence for which these defendants were charged. “Secret trial does not apply in a case of treasonable felony or involvement in alleged ‎unlawful society. During the trial we will prove to them that we are not an illegal organisation”, Muoma added.

The judge is expected to decide on the application by 2:00pm Friday.