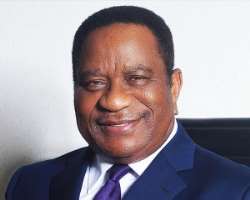 Alison, Madueke. a retired Rear Admiral and former Chief of Naval Staff, was said to have been invited to the commission, where he was interrogated for several hours over the discovery of a suspicious payment of about $600,000 in his personal accounts.

He was later released on administrative bail but his passport was seized from him. Sources at the EFCC, who confirmed the interrogation, did not also say whether the transactions had anything to do with his wife, Diezani, who was Petroleum minister in more than five years of Jonathan presidency.

Diezanni, who is said to be receiving treatment for cancer in London, is believed to be under investigation by the London police over fraudulent transactions. She is one of the key officials of the immediate past government who is often mentioned in relation to alleged monumental corruption that held sway under the administration.

It was however not clear  whether the transactions for which the retired admiral is being questioned had anything to do with his wife, Diezani

An official of the anti-graft agency however said the man was asked to appear before them to make clarifications on certain issues related to some financial transactions traced to his account. He said that although Madueke had been cautioned and released on administrative bail, he might be asked to report back on a future date.