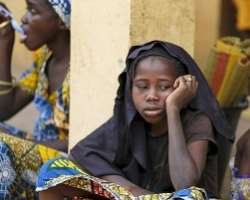 It was the hashtag that turned the spotlight on the crisis of Nigerian girls and women being abducted by Boko Haram: # BringBackOurGirls . But now that government and humanitarian efforts are resulting in some women being rescued from the Islamic militant group and returned to their homes, it seems not all Nigerians are welcoming them with open arms.

According to a joint report released Tuesday by UNICEF and human rights group International Alert, many women and teen girls who were once held by Boko Haram are being rejected by their families and communities. People treat the former captives with mistrust over fears the women have become radicalized supporters of the extremists. But the suspicious behavior of family members tends to become explicit persecution if the former captives bore children after being sexually assaulted by members of Boko Haram.

The babies may be innocent, but they are seen by locals as being infected with “bad blood” from their rapist Boko Haram fathers, according to the report. “There is a belief that, like their fathers, the children will inevitably do what hyenas do and 'eat' the innocent dogs around them,” wrote the report's authors.

Rejected by their families and neighbors, many of the women and their children are being pushed into poverty. To avoid homelessness and to provide for their babies, some are turning to prostitution to earn money. As a result, the children themselves are “at risk of rejection, abandonment, discrimination, and potential violence,” wrote the report's authors.

“These findings show a pressing need to do more to reintegrate those returning from captivity by Boko Haram,” Kimairis Toogood, International Alert's peace-building adviser in Nigeria, said in a statement. “Many of these girls already face lasting trauma of sexual violence and being separated from their families, so we must ensure they get all the support they need when they finally return.”

Approximately 2,000 women and girls have been abducted since 2012, but international awareness was only raised in late April 2014 after Boko Haram snatched nearly 300 girls from a school in the town of Chibok, in northeastern Nigeria. The hashtag stems from the Bring Back Our Girls movement, which was created that spring at a rally by Obiageli Ezekwesili, the former Federal Minister of Education of Nigeria.

Nigerians subsequently shared the hashtag on social media, and it was picked up around the world—including by celebs such as Rihanna, first lady Michelle Obama, and girls education activist Malala Yousafzai. Yousafzai went to Nigeria in July 2014 and demanded that the nation's president Goodluck Jonathan mobilize the government and take action . Despite the success of the hashtag campaign in raising awareness, those nearly 300 abducted schoolgirls still haven't been returned  home.

As for those girls and women who have been rescued, only to face a hostile homecoming, International Alert and UNICEF said more humanitarian assistance for them is needed. “There is a fear that if the needs of these survivors and returning populations are not met, these factors could add another dimension to an already complex conflict situation in northeast Nigeria,” said Toogood.