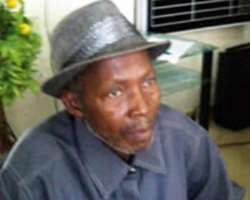 The 72-year-old Nitabai, a prominent chief of Otuoke in Ogbia Local Government Area of Bayelsa State, was whisked away at about 3.30am in his residence by seven heavily armed men.

Though details of his abduction were sketchy, a security source, who craved anonymity, told THE PUNCH that the gunmen allegedly gained access to Nitabai's residence from the back through the creek.

The victim's residence is located beside a creek, some distance away from a military checkpoint close to the Otuoke bridge, off the Onuebum-Otuoke Road.

Nitabai is described as the head of the compound from where the former president hails from.

It was learnt that the septuagenarian, though cousin to the former president, had been acting as father figure to Jonathan since the death of his (Jonathan's) biological father.

'A massive manhunt has been launched by a combined team of Marine Police and Anti-Kidnapping Unit of the Command, to rescue the victim and arrest the abductors. Investigation is ongoing.'

Nitabai was abducted two years ago by 10 armed men and spent about three weeks in the kidnappers' den before he regained freedom.

Upon his freedom in March 2014 when he was 70 years old, Nitabai, a former university lecturer had narrated his ordeal on how his abductors fed him with garri and oil for the gruelling three weeks he was held captive.

He had also said throughout the period of being held hostage, he was blindfolded.