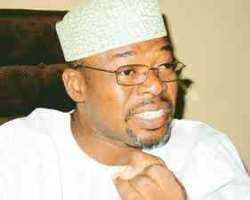 Segun Oni, Governor Ekiti State
The hope of some pupils in Ekiti State to write this year May\June West African Senior Secondary School Certificate Examination may be dashed as various public schools in the state have resolved to prevent them from sitting for the examinations until they pay fees they owe the schools.

Parents of some affected pupils told our correspondent in Ado-Ekiti on Thursday that authorities of the schools of their children had insisted that no defaulter would be allowed to sit for the final examination no matter the plea.

They appealed to Governor Segun Oni to ensure that their salaries are paid promptly to enable them to settle the fees so that their children's hope would not be dashed.

A parent, who is a civil servant attached to the Old Governor's Office, who pleaded anonymity, while appealing to the governor, said that he had not collected any salary this year.

He said, 'We have not been paid January, February and March salaries and April is about to end. My children are attending Christ's School, Ado-Ekiti. They are about to write WASSCE now but the school has threatened to stop them from writing the exams until they pay N10,000 accommodation/ feeding fee which every pupil in boarding school is charged.'

He said that although the state government paid the examination fee of all the pupils in the public schools but the pupils might be prevented from sitting for the exams.

A teacher who is also a parent said that the school had warned that no pupil would be allowed to sit for WASSCE until they pay the fees they owe.

The teacher who pleaded not to be mentioned, said that the state government still owed them March salaries. According to her, 'We were paid our salaries for the months of December, January and February in March. Now they are owing us March and April salaries. We just appeal to the governor to pay us because the future of our children is threatened.'

The state Commissioner for Information, Mr. Taiwo Olatunbosun, has denied the allegation.

He said, 'It is not true that we are owing. We have paid up to March.'

Meanwhile, the Executive Chairman of Ekiti State Universal Basic Education Board, Prince Dayo Adeyeye, has charged head teachers of primary schools in the state to inculcate the spirit of discipline, hard work, and dedication among their teachers.

According to a statement made available to our correspondent on Thursday, Adeyeye gave the advice during a routine inspection of schools in some local government areas of the state.

He said that head teachers should have firm control of their teachers and the pupils to ensure smooth and uninterrupted academic activities, since they were the ones to be held accountable for any lapse in their various schools.

According to him, 'Since you are the authority in your various schools, you should be able to maintain discipline, and make sure you run the school as your own in order to make the best out of the system.'