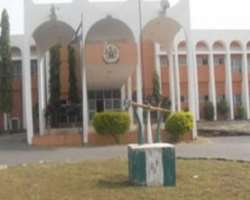 The political logjam in Kogi State is yet to be over.  As at Tuesday, five out of the 20-member state assembly sat to remove Honourable Momoh Lawal as the Speaker of the assembly and replaced him with Umar Imam.

Apart from the Speaker, the five legislators also said they had removed Honourable Kolawole Matthew as the majority leader, while the post of deputy speaker was yet to be filled, as they were still consulting over who should occupy the post.

But Lawal, who was flanked by the remaining 15 members of the assembly, said he remained the speaker, saying it was laughable for only five people to carry out the purported impeachment.

Following the recent development, there are palpable tension and apprehension around the assembly complex located opposite of the state high court,leading o the drafting of the Department of State Security (DSS), mobile and regular police to the complex to maintain security, following the hint that some members were about to carry out the impeachment.

However, at about 12 noon, five members, including Friday Sani; Umar Imam; Abdulahi Bello; Lawi Ahmed and Sunday Abbah, went into the assembly and locked themselves inside without allowing newsmen and the public to witness the proceedings.

After over one hour, they emerged from the chambers and Sani told newsmen that Lawal had been impeached, saying he had been elected as the majority leader.

He said Lawal was removed because the assembly no longer worked, as he (Lawal) had been running the legislature like a “sole proprietor” with its attendant effects on the performance of the assembly.

According to him, 15 members of the assembly had earlier agreed and signed that the Speaker should voluntarily resign after the emergence of Alhaji Yahaya Bello as the governor of the state.

He said: “The resolution we reached at our sitting today include the removal of the Speaker of Kogi State House of Assembly, the new speaker is Honourable Umar Imam, only one principal office was stepped down today and that is the position of the deputy speaker and the reason being that we need further consultation of members to arrive at a decision, because there are two good contenders.

'We have come to a point where we can not operate in this state without an assembly. We all know the role an assembly like that of Kogi State should play in the governance of the people of the state, but by the time the speaker can not reconvene the assembly, may be because of the threat of impeachment, so we can not continue.

Responding to the allegation through his address to newsmen at the speaker’s lodge Lokoja, Lawal said it was wrong for the members to meet at the office of the chief whip and carried out an impeachment without a formal sitting in the chambers.

According to him, 15 members met on Tuesday and passed a vote of confidence on the leadership of the assembly, wondering why the pro-impeachment group got the number they were parading.

He said: “By the powers vested on the speaker after consultations with members, I issued the proclamation that the assembly will resume on Thursday, any sitting outside Thursday is illegal. The assembly is an institution, it is not a place where somebody will sit in his office and say the speaker has been impeached.