CAmeroon mounts major offensive against Boko Haram base in Nigeria 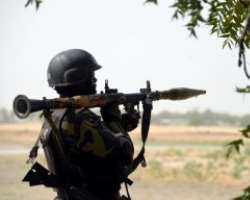 Cameroon mounted a major assault against a key Boko Haram base in Nigeria last week, inflicting heavy losses on the Islamist group and seizing arms and prisoners, the government said in a statement obtained by AFP on Tuesday.

The Cameroonian army offensive took place from February 11 to 14 in Ngoshe in Nigeria, some 15 kilometres (nine miles) from the northern town of Ashigashia on the border between the two countries, government spokesman and Communications Minister Issa Tchiroma Bakary said in the statement.

The report could not be independently confirmed.
The minister said around 100 hostages had been released, including 15 Cameroonians, in the attack against the Boko Haram command post housing facilities for making bombs and mines.

“The command post was also used to brainwash and train teenagers used as human bombs for kamikaze attacks,” he said. Cameroonian soldiers patrolling in the Cameroonian town of Fotokol, on the border with Nigeria, in 2 …

Four facilities for making improvised mines were found there as well as hundreds of containers full of explosive devices, batteries, detonator wires and suicide vests, the statement said.

The assault had been approved by Nigeria and was part of the “Arrow Five” operation involving a multinational force set up to fight Boko Haram that includes Nigeria, Cameroon, Chad, Niger and Benin.

In recent years, Boko Haram fighters slipped back and forth across the frontier, often using Cameroon’s remote north as a rear base, acquiring arms, vehicles and supplies there.

But since late November, the Cameroon army has carried out operations in several border areas aimed at weakening the Nigerian jihadists.

As a result, the insurgents turned away from direct confrontation with the military in favour of suicide attacks, increasingly staged by women and girls.

Nearly 1,200 people have been killed since the Nigerian fighters took their offensive into neighbouring Cameroon in 2013, according to government figures.

In Nigeria, the group has killed at least 17,000 people and made more than 2.6 million others homeless since their six-year campaign began.