Wike’s Revelations An Indictment Of The Supreme Court —Rivers APC 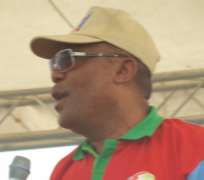 The Rivers State Chapter of the All Progressives Congress (APC) has described the revelations made by Chief Nyesome Wike about how he won the State Governorship Election dispute at the Supreme Court as an indictment of the apex court. Wike had publicly said during his well-publicised Thanksgiving Service of 7th February, 2016: “He (referring to former governor, Dr. Peter Odili) would call me at midnight to tell me what to do. He will say, ‘go to so, so place’. I took all his advice and here we are today victorious.”

Rivers APC said in a statement signed by its Chairman, Dr. Davies Ibiamu Ikanya, and issued Tuesday in Port Harcourt that Wike’s confession had ended the mystery about how he procured the shocking judgement considering that Dr. Odili’s wife, Mrs. Mary Odili, is a Justice of the Supreme Court.

“That Wike may have influenced the outcome of the judgement given by the Supreme Court for PDP in Rivers State was further exposed by PDP supporters, who started celebrating the judgement by 9am – almost ten hours before the incredulous judgement was delivered at 6.45pm on Wednesday, January 27, 2016,” Rivers APC said.

The party regretted that Rivers people had by the judgement been denied the opportunity to vote for the governorship candidate of their choice simply because “to Wike, everything in this world, including every judgement, has a price tag.”

Rivers APC aligned itself with the position of the Head of the Presidential Anti-Corruption Committee, Prof. Itse Sagay, that the reasons adduced by the Supreme Court for its judgement on the Rivers guber election are not convincing. According to the erudite Scholar in his reaction titled, ‘Wike Climbed Into The Governorship Seat Over Dead Bodies’: “Everybody knows that people like Wike climbed into the governorship seat over dead bodies and over the blood of human beings. There were no elections, they wrote the results; the evidence is there.” Sagay added that what the Supreme Court has done is to set the clock of electoral excellence and fairness and credibility back by, “ I do not want to say a thousand years, but certainly it is taking us back to where we were before (former INEC Chairman, Prof. Atahiru) Jega came in and sanitised the system.”

The party expressed its conviction that “the blood of our 100 members killed to install Wike as Rivers State Governor will one day touch the minds of the Supreme Court Justices and make them to give correct judgements that will save Nigeria from the shame in the international community occasioned by this unjust judgement.”

The statement also berated those that are criticising the party’s gubernatorial candidate, Dr. Dakuku Adol Peterside, for his principled stand on the obvious misleading judgement of the Supreme Court. Dr Dakuku Peterside only quoted what Wike said in Church and drew the attention of the world to it without passing a judgement. The fact remains that Dr Peterside never ever criticized the judiciary. Every person knows that Dr Dakuku Peterside is a man of character and high moral standing. In other climes what Wike said in church could cause an outrage. The party dismissed those criticizing Dr Peterside in this regard as being insensitive to the inviolability and sanctity of life as the 100 souls of APC killed for Gov Wike to be so elected meant nothing to them. To us, these people are ignorant people who do not deserve any serious attention. If anybody or institution is angry, such an institution or fellow should shift their anger to Wike who shamelessly told the entire world how he procured his Supreme Court judgement and leave Dr Peterside out of this sad development in our judiciary.

For avoidance of doubt, kindly find attached herewith a version of the youth tube recording of Gov. Nyesom Wike's speech at his Thanksgiving Service in Port Harcourt Sunday, February 7, 2016.