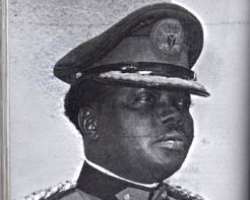 In Kano, where Mohammed hailed from, the 40th anniversary of his death was marked on Friday with special supplications offered by thousands of Muslims, lead by the emir of kano Muhd Sanusi the second.

The prayer session, organized by his son, Alhaji Misbahu Risqua Murtala Muhammad, through the Kano Emirate Council, was held at the Murtala Muhammad Mosque, Tudun Maliki quarters, in the state metropolis, where the grave of Late murtala located.

Thousands of Muslims converged at the mosque as early as 12 noon for the special prayers, where the Holy Qur’an was recited uncountablely, after which special supplications were offered by various scholars under the supervision of the Chief Imam of the mosque, Sheikh Kabiru Badamasi Dan-Taura.

The Emir of Kano, Muhammad Sanusi ll, did not only attend the prayer session, he also led other worshipers in the Juma’at congregational prayer at the mousque.

Emir Sanusi, in his Juma’at sermon, said that late Murtala would continue to be remembered for a long time because he was unjustly killed. He said the people of Kano, and, indeed, all Nigerians will continue to remember him because of the quality of service he offered to the country during his life time as Head of state.

Said Sanusi Though his leadership was brief, he impacted on the lives of Nigerians and will continue to be remembered for that.

This is the beauty of living a good legacy behind. Forty years after the demise of the late Murtala Ramat Muhammad many people remember him in their prayers. This is a sign of a good leader, the emir said in his sermon.

The emir then charged Nigerians, especially leaders, to emulate the late Head of State in their leadership style, saying whoever does good will surely be rewarded with goodies.

Shortly after the congregational prayer, the emir led other Muslims in closing the special prayer session. He also led his entourage to the late Murtala’s tomb where he again offered another prayer for his soul.

Alh. Risqua Murtala Muhammad, who represented the family at the prayer session, NEWSMEN that this kind of gathering always reminds me that I have really missed a great father.

Risqua, expressing delight on the massive turnout of Muslims at the event, said, Forty years after the demise of our late father, people still love him so much. Alhamdulillah. I have nothing to say to the people of Kano and Nigerians than to thank them for their love for our great father.

He added that the kind of love Nigerians show to his late father made the family members proud of him. I thank the Almighty God for being a member of the late Murtala Muhammed’s family he said.

Risqua recalled that growing up without a father wasn’t an easy task. Despite that, the entire family members, he said, resolved to be united and live decent lives.

Sheikh Dan-Taura, the Chief Imam of the Murtala Mohammed Juma’at mosque, NEWSMEN that the late leader offered his farmland for the construction of the mosque and laid its foundation before he died.

After his death, it was decided that the mosque be completed and named after him. It was commissioned in 1981 during the late Muhammadu Abubakar Rimi’s regime as governor of Kano State.

The mosque runs five schools. They are Nurul Huda, Ma’ahad Imam Dan-Taura, Tsangaya, Women Islamiyyah and Raudha (Nursery). The schools have a total population of over 3,000 students.

Apart from the late Murtala Mohammed’s body buried at the mosque, his mother Hajiya Rahamatu and son Zakariyya were also buried there.

Sheikh Dan-Taura recalled that 10 years ago, a similar prayer session was held at the mosque for the late Head of State. He commended his family for organizing the special prayer session, noting that this was one of the things children and relations should be doing for their deceased loved ones.

The Chief Imam urged leaders at all levels to take a cue from the late Murtala and be honest when dealing with their subjects. He said no matter what position one attains in life, one would be remembered by how he related with his people when he held office.

Mallam HARUNA SANI, a Qur’anic scholar and frequent visitor to the Murtala Mohammed Mosque, recalled that he met the late Murtala Muhammed many times when the mosque was under construction.

There was a day he came here to supervise work and some workers suggested that this tree (pointing at a tree where the late Murtala Muhammed’s tomb was located) should be cut down. But the General said they should let it be because it would one day serve another purpose, as if he knew he would be buried under it.

Mustapha described the late Head of State as a jovial and patriotic leader who had the country and its people at heart.