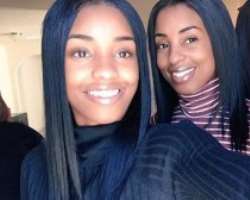 All they planned to do was take a selfie and share it with a friend.

But that photo, taken by Indianapolis high school student, Kaylan Mahomes, and featuring her twin Kyla and their lookalike mom , has been shared a bit more than that. A few days after it hit Twitter in early February, the image embarked on a viral, worldwide tour.

“Who would have thought that people in Argentina would be looking at my face?” mom Tina Brown tells PEOPLE. “We’ve had a lot of people checking in: ‘It’s reached Nigeria.’ ‘It’s reached Paris.’ That picture has been more places than I’ll ever be!”

The makings of instant stardom began on a recent afternoon, when Brown, a 35-year-old nurse, picked up her 16-year-old twins after school.

“My daughter, who likes to take photos all the time, said, ‘We need a photo!’ Brown says. After a friend shared it on her Twitter account, Kaylan decided to post it herself. Within four days, the photo had been shared via social media around the world, with many people debating about which beauty is the mom. (For the record, Brown is on the left in the black blazer.)

Their favorite reaction: “The comment about Pharrell being the dad has been the funniest meme we’ve seen,” Brown says of the singer, also known for his boyish looks. “We weren’t expecting all of this. It’s surreal and bizarre.”

So, what’s her trick for looking like a teenager?

“Some things you’ve got to keep secret,” Brown says with a laugh. But she does share a few tips: “It’s good to wash your face most of the time with plain water. I also exfoliate once a week, but I do think the water helps.”

Having strangers comment on the trio’s resemblance is nothing new to the family; ever since the twins became teenagers, Brown is mistaken for their sister “almost everywhere we go,” she says.

Brown is quick to add that “it’s not always wonderful. People don’t always look at me as, ‘Here’s a 35-year-old mother.’ Maybe you’re not treated with as much respect.”

Daughter Kaylan agrees.
“Sometimes it’s weird,” she says, “because people think she’s our sister and they’ll say things to her that they wouldn’t normally say to an adult.”

Although the majority of the world’s reaction to the photo has been positive, this is still the Internet, so bring on the critics.

“There have been some negative comments, but they don’t really know us,” Brown says. “And this is kind of what you subject yourselves to if you put something on the Internet. Hey, everyone’s entitled to their opinion.”

The twins, who both plan to become pharmacists, “are just as shocked as I am” about the photo going viral, she continues.

“Kids come up to them at school and are like, ‘You’re famous!’ A couple of kids asked for their autographs and they were like, ‘No!’ They’re really humble and have taken this really well,' the proud mom says.