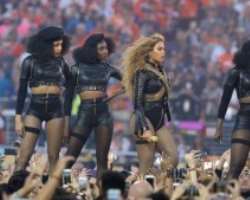 Well the backlash from that has nothing on Beyoncé’s performance last Sunday.

Five days after Beyoncé's Super Bowl half-time show in which dancers were clad in Black Panther inspired costumes and one dancer held up a “Justice 4 Mario Woods” sign, the controversy continues to grow. There's an anti-Beyoncé protest rally in front of the NFL headquarters planned for Feb. 16, a Boycott Beyonce sign-up page, and a social media hashtag #boycottBeyonce that people are using when addressing the performance — from both sides of the issue.

— Milez25 (@Milez25NYC) February 10, 2016
Beyoncé used her celebrity 2 highlight #blacklivesmatter and people want to #BoycottBeyonce ? Ridiculous.Good for her for using her platform!

— Bobby Hall (@BobbyTBD) February 9, 2016
So has hers turned out to be most controversial half-time show ever?

“Black women around the country, on both social media and in mainstream publications have rushed to praise the video and the artist for affirming the political moment of Black Lives Mattering, and the uplifting embrace of forms of southern Black culture,” Rooks told FOX411. “On the other are pickets and boycotts and rage, mostly by whites. What this moment tells us is that as much as we might wish differently, race often still functions as a hard and fast dividing line. It also tells us that Black women who perform at the Super Bowl bring simmering cultural tensions to a full boil, along with really high ratings.”

But urban youth Minister Patrick D. Hampton, who created the Boycott Beyoncé page, told FOX411 he believes the focus should be on the challenges at-risk youths face in the streets.

Based in Chattanooga, Tenn., Hampton said he sees first-hand the issues that are contributing to violence.

“I work in the inner city with teenagers,” Hampton explained. “ A week ago, my mentee was killed in the streets not by a cop, not by a white man, not by the prison industrial complex, not a by a system setup by white men. He was killed by a rival gang member that was black.”

Social media helped stoke the controversy following Beyoncé's performance, but Treva Lindsey, Assistant Professor of Women’s, Gender, and Sexuality Studies at The Ohio State University, said Facebook and Twitter are not to blame.

“There has never been a sustained moment of racial harmony in our nation’s history. This moment is no exception. I think that there is heightened awareness of existing tensions and a growing public discussion around issues of race and racism,” Lindsey said. “Social media provides a new space for these discussions to occur. It also allows for people to be 'anonymous' in particular ways, which can promote more vitriolic rhetoric. Social media has been one of many platforms for racial justice activists, but it has also been a platform for people to espouse bigotry and prejudice.”

Hampton said he would also like to see celebrities address “thug brutality” on social media.

“If BlackLivesMatter, why isn’t Beyoncé and these rappers addressing thug brutality like they address police,” he said. “The Super Bowl was supposed to be a time to escape all of the nonsense but Beyoncé just ripped open another wound and America is responding.”

FOX411 reached out to Beyoncé and the NFL but did not receive comment.