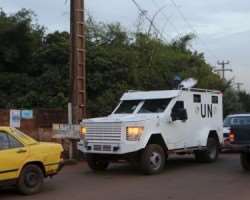 Suspected Islamist militants attacked a U.N. peacekeepers’ base in the northern Mali town of Kidal on Friday, killing several people and wounding others, a spokesman for the separatist Coordination of Azawad Movements (CMA) told Reuters.

“There is gunfire and mortar fire against the MINUSMA (U.N. peacemaking mission) camp. It is an attack by the Islamists, apparently involving a suicide car bomb,” said CMA spokesman Radouane Ag Mohamed Aly.

A U.N. spokesman said there were some dead and wounded in the attack, which began at 6:45 a.m. (0645 GMT). He said there had been eight mortar shells as well as gunfire. A separate U.N. source, who was at the base but declined to be identified, said two people had been killed.

The base forms part of an attempt by the MINUSMA mission to keep the peace in Mali in the wake of a takeover of the north by Islamists in 2012, which was thwarted by a French-led intervention force that forced the militants out of key towns.

The U.N. mission has not stopped the violence, however, and Islamist militants have expanded their attacks in recent months into other parts of Mali and beyond.

These have included an attack on a hotel in Mali’s capital in November in which 20 people died, and one on Burkina Faso’s capital in January in which 30 were killed.