A Short Pathology Of Corruption In Nigeria 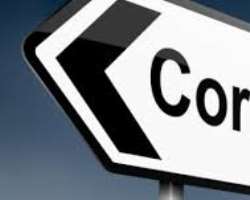 This week, I would be dwelling on the topic of corruption in Nigeria in my treaty. Very quickly let me state that I am one of those that believe that the problem in Nigeria is not necessarily corruption. I equally am of the opinion that Nigeria and Nigerians are not anywhere near the most corrupt in either the world, Africa or West Africa.

I also believe that while Dasukigate and all other gates are issues, there are several issues beneath our corruption malaise. And I would crave our indulgence in following me, but first let me tell us the two following narratives.

The first is one that I read about a private investigator in the United States who would knock on the door, show his badge to whoever answered, and say, "I guess we don't have to tell you why we are here." Many times, the person would look stunned and say, "How did you find out?" then go on to describe an undiscovered criminal act committed long ago.

Writing in the Smithsonian magazine, Ron Rosenbaum described the reaction as "an opening for the primal force of conscience, the telltale heart's internal monologue."

Gandhi in Watkins Masters of Wisdom narrated the second episode I will share with us…”There is an incident that occurred at the examination during my first year at high school and which is worth recording. Mr. Giles, the educational inspector, had common a visit of inspection. He had set us five words to write as a spelling exercise. One of the words was "Kettle". I had misspelt it. The teacher had tried to prompt me with the point of his boot, but I would not be prompted. It was beyond me to see that he wanted me to copy the spelling from my neighbor's slate, for I had thought the teacher was there to supervise us against copying.”

The result was that all the boys, except myself, were found to have spelt every word correctly. Only I had been stupid. The teacher tried later to bring this stupidity home to me, but without effect. I never could learn the art of "copying".

We all know things about ourselves that no else knows, so it's not okay if we defend Dasuki, or debate on the rule of law, or contend that the issue is Amaechi equally being corrupt, or if Fashola helped himself to the cookie in the Lagos jar.

After all, whether we agree or not, there is hardly anywhere we don’t have a form of corruption or the other, Americans even add the swag of calling it “organized crime, in India if you are married to a policeman, it is advisable to have money in your pocket before going to bed, 'cause your policeman hubby could just wake up in the middle of the night and ask for a bribe. With all the Chinese pill treatment given to their citizens, the men from chinko province are not any better if you get my drift.

So, are all Nigerians corrupt? The plain answer is no, and whether APC, PDP, our politicians and leaders like it or not, there are millions of Nigerians that are not corrupt.

There are millions of Nigerians who like Gandhi will not "copy", they will not receive or take bribe or gratification, not because they do not have the opportunity, but simply because they simply won't.

There are several millions amongst us that will not change several sworn affidavit of age, and have different ages in different resume.. There are millions that will not take an indigenous certificate for a place they do not have a root, just to be politically correct or for political gains.

We have scores of corrupt cops, military personnel and paramilitary, but despite their blackness of heart, there equally exist, countless security operatives who are not tainted, that would not take promotions that have not earned or accept gratification to do duties which tax payers have earned.

Many Nigerians pay their taxes willingly without compulsion though our leaders engaged even in a higher form of corruption by denying such persons basics such as electricity that has been paid for, security, which is a right and all other fundamentals.

Many Nigerians still get admitted into the University, high schools, and various institutions without paying either cash or kind. And good grades have been obtained without waists swerved or bank till shaken…while many buy the jobs they have today, there are those who are on the job legitimately and carry it out without fear, favor, ethnic jingoism and parapoitic behavior.

Husbands bribe their wives, girlfriends are corrupt with their partners, and fathers bribe their kids. Daughters and sons buy their parents from proceeds of their “trade”. Communities, and religious bodies celebrate thanksgiving for the corrupt, and encourage freshmen to out steal and out corrupt their predecessors.

Not all journalists collect envelops of many colors, neither is it all doctors won’t treat you until you have part with a deposit. Not all our teachers plagiarize, or sell handouts or trade admission. We need systems and structures that work, we need institutions that are incorruptible, run by content people that earn a living wage.

We need a class of Nigerians that won’t copy, but that will set high moral standards. Nigerians that have nothing to fear when the investigators come calling, there are millions of them, and Mr. President, while the debate continues whether corruption is stealing, kindly note that we are not all corrupt, and to the incorruptible ones, keep standing tall, if we have done enough—Only time will tell