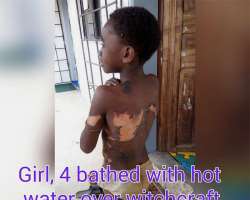 The Nigerian police and other security agencies have been called upon to investigate the case of a four-year-old female child who was bathed with hot water over accusation of witchcraft in Anambra State, the South Eastern region of Nigeria and bring the culprits to book.

The Founder and President of the Child's Right and Rehabilitation Network (CRARN) Mr. Sam Itauma made the call in a telephone chat with newsmen yesterday.

Itauma stated that his organization was prepared to work with the security agencies in the country to unravel and bring the culprits of the heinous crime to book to serve as a deterrent to others. The CRARN founder said the little girl did not deserve such gruesome attack by an adult who has the obligation of protecting her.

The little girl was said to have been poured with hot water all over the body by her stepmother who believed that the child was possessed with witchcraft powers and was responsible for her persistent illness.

"We're willing to work with the police and other relevant agencies to make sure that the perpetrators face justice to serve as a deterrent to others."

Mr. Itauma disclosed that the fate of the burnt child was first brought to limelight by a CRARN volunteer and member of the Children Brigade International, Mr. Ubong Etuk who has been working assiduously to campaign against the silent brutality against innocent children across the country on the basis of witchcraft superstition.

The charity worker called on the government to carry out and sustain enlightenment campaigns to brush off superstition in minds of the people to lessen the spate of witchcraft related attacks and abuse on children and elderly persons. He averred further that anyone accused of witchcraft would not have a defender on his or her side even as the immediate relations would be scared and flee from him, thereby allowing the victims to suffer and die in the hands his accusers and attackers.

"The only way to checkmate this trend is for the government across the country to partner with the civil society and faith-based organizations and launch a vigorous awareness campaign so as to cushion the yoke of superstition in the people's mind."

Mr. Itauma lamented that even the scholars who were supposed to be the touch-bearers of the society were themselves trapped in the vicious circle of witchcraft belief which he said was entirely superstitious and baseless. He regretted that religious profiteers were exploiting the ignorant population in Africa to fan embers of discord in families with their false teachings for personal gains.

"It just baffles me that in this 21st century, you still have greater chunks of the scholarly community believing that ordinary diseases like malaria and high blood pressure are caused by certain spiritual and mysterious beings somewhere. This has given some religious profiteers the leeway to dominate the airwaves with spurious preachings and fears with the sole intent of exploiting it to their whims and caprices.

For further information, go to www.CRARN.net