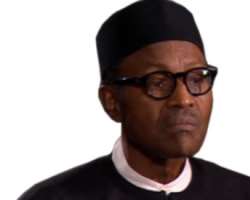 The statement by President Muhammadu Buhari to the effect that the 'judiciary is his headache' in the fight against corruption is a 'misconception', according to the Nigerian Bar Association [NBA].

The president of the association, Austin Alegeh, (SAN), said even though Judiciary has its own shortcomings, it cannot be â€Žsolely held responsible for the challenges which the President faces in his quest to rid the country of corruption.

In his words,'That statement is out of misconception. The judiciary is not the only organ in the criminal justice system. There are the Police, the Prisons and other security agencies.

'It will not be right to heap the blame on the judiciary even though it has its own shortcomings.'

He assured that the judiciary would continue to support the anti-corruption crusade and do everything within its powers to discharge it's duties effectively and responsibly.

If litigants don't go to the judges, if they don't make moves, you won't say judges are corrupt.

The President is trying, let us all acknowledge it. But again, we must not scratch the problem of corruption on the surface. To me what we are doing now, arresting people, taking them to court, we are just scratching that problem on the surface.

Judiciary has its own procedures. You don't just take somebody to court, you expect the judge or the court to send that person to jail the following day. The judge who does that will loose is commission.

Mind you judiciary is not restricted to Nigeria. It is worldwide. Nigerian judiciary cannot operate in isolation because we are fighting corruption. And we cannot fight corruption outside the rules, outside lay down procedures.

Now, my suggestion is why are people stealing? Why are there loopholes in Nigeria? I dare say, if somebody else comes tomorrow, then there might be lots of revelation, why? Because we believe government is the source of money, particularly government at the federal level.

Again, that takes us to why this kind of federalism lionizes all of us with over-bloated centre. There are so much power, money and resources at the centre. They take so much and everybody wants to be at the centre to steal, to destroy like locus and caterpillars of the Bible. Why are we not taking away some of this powers. Again, this government of general Buhari with all respect is not addressing the over bloated federalism that we have. We must remove the masquerade called 'the federal'.

It is just like list of veil of incorporation in company law. We must lift the veil and allow the power to flow. This federation belongs to all of us, it doesn't belong to federal government.

In Britain, America, they establish strong institution and that is what is enduring. It is institution that give warnings and corrections to human beings.

Charles Lambo (Esq.):
The judiciary is the third arm of government and for President Buhari to have made allegation that the judiciary is his headache is a misnomer. The statement is derogatory, such that he is indirectly accusing the judiciary of compromise. To me, he has no right to say that, but the point is that Section 309 of the Constitution confers much power on the president that he could say anything about another arm of government. I think the president needs to apologise.

Morally, what he means is that the judiciary is corrupt and not independent. In some clime, the legislature and judiciary are the most powerful arms of government, going by the role they play in governance, but the long period of incursion in politics by the military has really changed a lot in Nigeria.

Olisa Agbakoba (SAN):
Senior Advocate of Nigeria and former president of NBA, Olisa Agbakoba, stated that, what he read in the newspapers President Muhammadu Buhari meant is that, he needs the utmost performance of the judiciary in his anti-corruption crusade. That the judicial arm of government should deploy all available skills in ensuring the fight against corruption and solve the associated problems. The President by interpretation, perceived the judiciary as a strong ally in the anti-graft crusade.

I think the President statement has been misinterpreted by the media. That is why in most cases, one is careful talking to the press.

Ebun-Olu Adegboruwa:
President, Major-General Muhammadu Buhari, (rtd.), stated that the judiciary has become his major headache in the fight against corruption.

The President's statement, constitutes a direct war on the judiciary, meant mainly to intimidate the third and most stable arm of the realm. Coming on the heels of the threat by the Attorney-General of the Federation, that judges will be sent to jail, the President's statement portrays grave danger for our democracy, which is founded on the rule of law, as personified by the judiciary. Not long after the President's vote of no confidence, the Chairman of the All Progressive Congress, the ruling party of the President, called for the investigation of Supreme Court Justices, on account of the performance of their constitutional responsibility of interpreting and declaring the law.

It is therefore very clear now, that the President and his party have declared a needless war on the judiciary, as an indirect way of intimidating the courts to bow to the whims and caprices of the government and its functionaries.

In times past, the President and his ruling party have benefitted immensely from this same judiciary that they are now castigating, such as in February 2015, the Federal High Court in Abuja saved the President the agony of being excluded from the 2015 Presidential Elections, on account of his alleged non-possession of a WAEC certificate.

The judiciary is part and parcel of government, and thus, it is totally uncharitable, for the head of government, the President, to be breathing down on another arm of the same government, because they failed to meet his expectations of favourable consideration of cases, in his favour or in favour of his party.

The principle of separation of powers, as enshrined in the Constitution, which the President voluntarily swore to uphold, must be adhered to. There is no reason why the Executive should interfere in the business of the judiciary or seek to cow and bend it to do its will, willy-nilly.

The major challenge with the anti-corruption war of the President is that it has not factored in the most important agent of that war, the judiciary, which is presently underfunded and neglected. In most courts across Nigeria, there are no facilities, judges are poorly paid and lawyers and litigants alike are pushed together in crowded, hot small courtrooms, with no chairs, no electricity, etc.

The courts are congested with cases, due mainly to the few number of judges available and this has created so much stress for the judges, such that they are unable to function optimally.

Chris  Akiri (Esq.):
My reaction when he made that statement was to say that it was an unfortunate statement that he, Mr. President made. There are three arms of government, legislature, executive and judiciary, and there are principles of separation of powers among the three arms of government. For the head of the executive arm to accuse the judiciary as his own headache, we have sold ourselves to the outside world as the most corrupt nation in the world.

Don't forget few days ago, John Kerry, Secretary to the U.S Government, while in Europe, quoted our Minister of Information saying, 'how our people stole about N1.3tr, about 55 Nigerians looted the money'. That's the kind of thing that John Kerry reported about Nigeria to the entire world.

The Nigerian Judiciary is an outstanding Judiciary never minding that there are Hiccups in the system.

But that is half the story, not the full one. The fuller picture is that of the failure of the spectrum of actors (criminal justice agencies) as a whole. The police, investigators, prosecutors, prisons and judiciary- all contribute in unequal measure, to the situation that we have at hand. However, I think why people single out the Judiciary is because they know that once cases enter the court, the Judge assumes overall responsibility for managing the trial of the case. This is called case management. The responsibility of completing the trial speedily is, although shared with others, primarily that of the Judge.

So when cases drag interminably in the docket, we can look to the Judge and ask why. It is however different when the issue is about outcomes of corruption trials.

Where the case is tried and the prosecution is unsuccessful, then we must look away from the Judge to other causes. That is the point where we can interrogate the prosecution's own role and effectiveness, all things being equal.

But the context of the President's speech is mostly about trial delays, and this more directly implicates the judicial function. Given that the concern the President expressed is about delays, I think his perception resonates with those of many Nigerians.' The Guardian