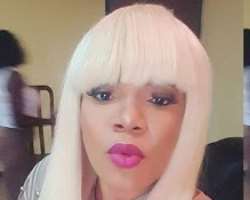 Since the crash of the marriage of actress Toyin Aimakhu's , she has been in the media for one controversial reason or the other.

The latest was the full confirmation that she's in a romantic relationship with a top Yoruba movie producer, Seun Egbegbe.

It's obvious the actress is sending a signal that clearly states 'I'm back to my grove'.

Some of her fans are of the opinion that Miss Aimakhu is not on the right tract as she's expected to nurse her broken marriage for a while.