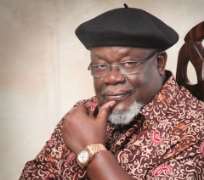 Tom Ikimi, a former chieftain of the All Progressives Congress and ex- minister of foreign affairs to late Nigerian dictator General Sanni Abacha has been arrested by the Economic and Financial Crimes Commission over his role in the $2.1billion arms scandal.

According to Sahara reporters, Mr. Ikimi, who decamped from the APC to support former President Goodluck Jonathan bid for a second term, had been grilled by the EFCC in Abuja for two days and allowed to go home each day after interrogation because of his health.