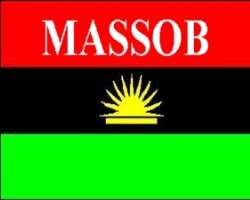 The Movement for the Actualization of the Sovereign State of Biafra, MASSOB, has vowed to make Nigeria ungovernable if its demand to conduct a referendum in the South East was not heeded by the Federal Government.

MASSOB through its Director of Information, Samuel Edeson in a statement to newsmen in Enugu Thursday, said,

'We shall use everything at our disposal to fight Nigeria Government especially through civil disobedience. We are going to call for sit at home in all Biafra land and Lagos. MASSOB will drag former president Olusegun Obasanjo to the International Crime Court, ICC, for all the atrocities he committed against Biafra since 1970.

'The massacre of Odi people, the Tiv, Jukum and the massacre of MASSOB members in Aba, Okigwe and Onitsha including the killing of six Igbo traders in Apo, Abuja.

MASSOB will be taking her campaign to United States of America, United Kingdom, France and China embassies in Abuja.

'MASSOB therefore calls on all people of old eastern region, Delta, parts of Kogi and parts of Benue States to support the referendum that would soon take place in Biafraland. Our freedom is non-negotiable.'- The Sun.