Helicopter crash into lagoon in Lagos 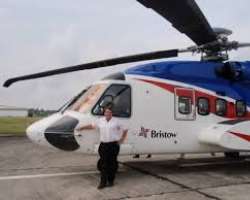 Another helicopter, belonging to Bristow has crashed into the lagoon.

This coming just six months after a Bristow helicopter crashed in Lagos, killing some of its occupants.

According to reports, , the crash like the previous one occurred at the lagoon in the Oworonsoki end of the state while the helicopter was on its way to the Murtala Mohammed International Airport, Lagos.

But this time, the 11 occupants of the helicopter survived and are currently receiving medical treatment, according to the authorities.

The passengers were said to have survived because they all wore their live jackets.

It was learnt that  the pilot deliberately crash-landed the craft when he discovered a major fault in the helicopter, which helped in ensuring survivors.