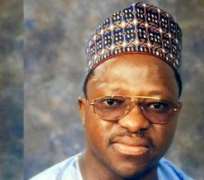 The Economic and Financial Crimes Commission on Tuesday continued its case against a former Governor of Plateau State, Joshua Dariye, with one of its detectives, Musa Sunday, telling a Federal Capital Territory High Court in Gudu how the former governor allegedly shared N1.162bn belonging to the state.

Dariye, who is now the senator representing Plateau Central Senatorial District in the Senate, allegedly obtained N1.162bn ecological funds as Governor of Plateau State in 2004.

Dariye, who served between 1999 and 2007, is being prosecuted for allegedly diverting Plateau State's ecological funds while in office as governor.

Sunday, an investigator with the EFCC was cross-examined by Dariye's lawyer, Garba Pwul (SAN) on Tuesday.

The detective who had earlier been led in evidence by the lead prosecuting counsel, Mr. Rotimi Jacobs (SAN), under cross-examination gave a breakdown of how Dariye allegedly disbursed the N1.16bn to his political associates and officials of his party, the Peoples Democratic Party, in Plateau State.

He said investigations by his team of detectives revealed that the ex-governor gave N100m traced to a company – Marine Float Nigeria Limited owned by former Vice-President, Atiku Abubakar.

“The Ecological Fund Office is under the Presidency but the Office of the Vice-President oversees it and the vice-president chairs the agency's activities. The vice-president at that time was Alhaji Abubakar Atiku,” the witness said.

He also said N100m was traced to the South-West PDP, which was received by then Minister of Special Duties, Yomi Edu, N80m to then Permanent Secretary of the Ecological Fund Office in the Presidency, Kingsley Nkoma; N10m to a former Deputy Senate President, Ibrahim Mantu, N6.8m to the PDP Plateau State and N66m to 274 PDP wards in the state.

Sunday, who is the first prosecution witness, read out the portion of the statement made by Dariye to the EFCC where he confirmed the distribution of the money among his political associates in a statement he wrote to the EFCC in July 2007.

When given Dariye's statement to read, the witness read from page 10 of the statement marked Exhibit P13(A) which highlighted how Dariye gave a breakdown of how he disbursed the N1.162bn received from the Ecological Fund Office.

“In the course of investigation, Marine Float was found to be a company owned by the former Vice-President, Alhaji Abubakar Atiku. As at when the money was paid, the Vice- President was the Chairman of Ecological Fund Office,” the witness said.

He denied knowledge whether the N100m was recovered from Atiku.

When Pwul suggested to the witness that the then President, Olusegun Obasanjo, returned to Plateau State in 2004 the N100m paid to the South-West PDP by Dariye, the witness denied knowledge of such development.

He added that investigation into the issue revealed that Dariye paid N80m to the then Permanent Secretary of the Ecological Fund Office, Kingsley Nkoma, “for facilitating the prompt release of N1.62bn ecological funds to the state.

“The N80m paid in favour of Union Savings and Loan, was traced to Kingsley Nkoma, Permanent Secretary of Ecological Fund Office. We recovered the N80m from Nkoma, who said that was his share for facilitating the release of the money. That was the bribe he collected.

“Investigation proved, while he was invited, that the N80m paid to him through Union Savings and Loan was a bribe money paid to him by the defendant. The money was recovered from him. The N80m registered from Nkoma is registered as exhibit and it is with the EFCC. When we invited him, Nkoma said that that was his share of the money and he was made to return it.”

The witness restated his earlier claim that Dariye made his banker, All States Trust Bank (now defunct) to conceal his identity.

He said their investigation revealed that the mandate card for the account allegedly operated by a firm linked to Dariye – Ebenezer Ritnan Venture – did not carry anybody's photograph as required.

He said they were able to uncover the company's true ownership by Dariye's signature on the mandate form.

The witness said the bank and its officials, who claimed to have granted Dariye waiver by not including his photograph in the account opening documents, had since been convicted by a Federal High Court in Kaduna for aiding fraud.