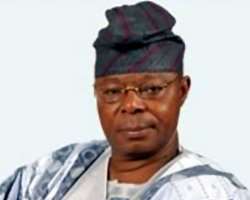 The award, which is part of the 40th anniversary celebrations of Ogun State, was conferred on five outstanding Ogun stakeholders on Tuesday, February 2nd, 2016. Oba Otudeko (CFR) is a Nigerian entrepreneur and visionary reputed for his highly successful domestic and foreign investments that cut across diverse sectors of the economy.  He was a former President of the Nigerian Stock Exchange and assumed responsibility for the change transformation of the Nigerian capital market along with its Council driving the market to its highest capitalization ever during his tenure.

Outside of the private sector, Oba Otudeko has had a distinguished career in public service, especially in the area of education. He was Chancellor of the Olabisi Onabanjo University (formerly Ogun State University), Ago-Iwoye, Ogun State, between 2001 and 2010 and a member of the Africa Regional Advisory Board of London Business School, London, UK.  Dr. Otudeko also served on the board of several blue-chip companies including Airtel Nigeria Limited, Fan Milk Nigeria Plc, Central Bank of Nigeria and the Chairman of Honeywell Nigeria Plc.

According to the Global Head, Marketing and Corporate Communications, FBN Holdings Plc, Folake Ani-Mumuney, FBNHoldings celebrates this honour bestowed on its Chairman by the Ogun State Government. 'Dr. Otudeko has brought about advancement to the Group as he applies his far-reaching experiences in his leadership of the Board. We are immensely proud of him even as he adds another feather of success to his cap', she further stated.