How four friends took turns to rape me: 14-year-old girl 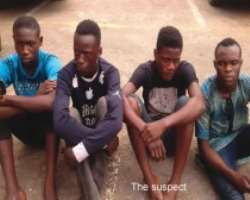 Speaking to Saturday PUNCH when the men of the Special Anti-Robbery Squad of the Lagos State Command paraded some suspected criminals recently, Habibat said the friends threatened to kill her if she told anybody about the incident.

Narrating her ordeal, the young girl who said she had known Femi as her tailor, said she went to him to have her dress mended when he and his friends pounced on her.

“Femi had once told me he would want to marry me and I told him I wasn't interested. That particular day, I had gone to his shop to give him a dress to fix for me. He said Brother Abidoye (I used to run errands for him) was calling me. I got to Brother Abidoye's room and I didn't see him.

“At that point, Femi and his friends entered the room, switched off the light and they raped me. I tried shouting and calling for help but because they had tied my mouth, I couldn't shout very well.

“When they finished, my private part was paining me. I had to tell my mother what happened. That was when she alerted the police and the boys were arrested,” she said.

However, the young men claimed they didn't rape her saying it was a consensual act.

Speaking to our correspondent, Femi said Habibat has been his girlfriend for about a year and she actually paid her for the sex they had.

“She is just lying against me. We have been dating since last year. She is more than 14 years old. She came to my shop that day and I suggested to her that we should enter the room. She said I should give her money. I asked her how much she wanted and she said N1,000. I gave her and we went inside and we had sex.

“My friends were outside. We couldn't have held her hand. A lot of people were even outside. If we had forced her, people would have seen us. Her dad even met me and asked if I would accept her as my wife if she gets pregnant and I said I would because she is my girlfriend. Her dad said I should go because I didn't have a problem. I have been sleeping with her since because she is my girlfriend.

In his own defence, Oyekanmi said Habibat readily agreed to have sex with him.

“We were at Femi's place and she and Femi entered the room. Later on, I entered the room because I wanted to charge my phone. I didn't see Femi there but I saw the girl naked. She wasn't crying. So I told her I wanted to have sex with her and she said I should go ahead.”

Oladele as well, insisted Habibat collected money from Femi and also agreed to have sex with them.

“She was very comfortable with what we did. When I got to the room, I told her she should allow me to take my own turn and she readily agreed. Nobody held her. People have been sleeping with her. This wasn't the first time. We all know her in our area. She readily gives to anybody who asks for it.