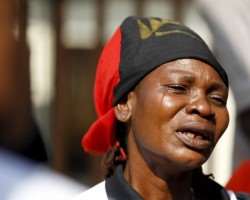 A Biafra supporter cries during a rally in support of Nnamdi Kanu in Abuja, December 1, 2015. Dutch lawyers have filed a case against Nigerian President Muhammadu Buhari for alleged crimes against humanity against pro-Biafran activists. AFOLABI SOTUNDE/REUTERS

The pro-Biafran activist group led by the imprisoned Nnamdi Kanu has filed a complaint against Muhammadu Buhari in The Hague, accusing the Nigerian president of war crimes.

Thousands of people in southeast Nigeria have demonstrated in recent months, demanding independence for Biafra . Kanu, the leader of one of the most prominent activist groups—the Indigenous People of Biafra (IPOB)—was arrested by Nigerian security forces in October 2015 on charges of ethnic incitement and sedition. He remains in detention and was refused bail by a federal high court in the capital Abuja on Friday.

Goran Sluiter, a lawyer at Dutch human rights legal firm Prakken d'Oliveira, filed the complaint with the International Criminal Court in The Hague on Friday. Sluiter tells Newsweek that there has been “an intensification of violence and crimes committed against Biafrans since Mr Buhari became the Nigerian president.”

There have been numerous reports of pro-Biafran protesters being killed in clashes with Nigerian security forces during demonstrations . More than 20 protesters and two police officers have been killed since October 2015, AP reporte d, with about 200 people detained across the country. Inspector General Solomon Arase, Nigeria's chief of police, warned protesters in December to stop their activities or face “the full weight of the law.”

“Nigeria is already a long time on the agenda of the [ICC] prosecutor and Nigerian courts are not dealing at all with these crimes. The time really has come for the ICC to act,” says Sluiter.

The complaint was filed on behalf of 17 unnamed victims and alleges to set out evidence of crimes against humanity—including torture and murder—committed by Nigerian security forces against pro-Biafran protesters.

Ndubuisi Osuala, the coordinator of IPOB's branch in the Netherlands—which he says numbers around 200 official members—says the group wishes to see Kanu released and Buhari prosecuted for overseeing crimes against Biafrans. “What every IPOB member, every Biafran citizen wants is the release of our great leader, Nnamdi Kanu, who is a freedom fighter,” says Osuala. “Secondly, we need the International Criminal Court to bring justice and equity to our case…[President Buhari] has to be prosecuted and face the justice for what he did.”

Osuala also says that his group wants independence for Biafra but is seeking it by peaceful means. “We need to get freedom by peace and that is why we are protesting,” he says. “We are not terrorists, we are not killing people.”

Buhari has previously refused calls for Kanu to be released, describing the activist—who is based in the U.K. and runs the underground media outlet Radio Biafra— as a flight risk .

Femi Adesina, a media advisor to Buhari, declined to comment on the ICC case and told Newsweek that while Kanu's case was ongoing, the Nigerian presidency would rather not comment on the matter.

The ICC was not immediately available to confirm that the complaint had been filed. Once a complaint is filed at the ICC, the prosecutor can decide to open an investigation if there is a reasonable basis for believing that crimes against humanity have been committed. Nigeria is a signatory to the Rome Statute, upon which the ICC's jurisdiction in based.