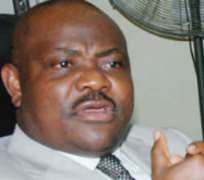 The Supreme Court on Wednesday affirmed the elections of Messrs Nyesom Wike, Ibikunle Amosun and Dave Umahi as the duly elected governors of Rivers, Ogun and Ebonyi states, respectively.

A seven-man panel led by the Chief Justice of Nigeria, Justice Mahmud Mohammed, affirmed the governors' elections in three separate judgments on Wednesday.

The judgments were delivered shortly after marathon hearings in the appeals in respect of the governorship elections conducted on April 11, 2015 in the respective states.

But reasons for the judgments for the Rivers and Ogun states will only be given by the apex court on February 12, while that of Ebonyi will be given on January 29.

While the Supreme Court set aside the judgments of both the tribunal and that of the Court of Appeal which had both sacked Wike, the apex court only upheld the verdicts of the two lower courts with resection to the elections in Ogun and Ebonyi states.

Justice Kudirat Kekere-Ekun, who read the lead judgments in the three appeals, held that the appeal filed by Wike was meritorious.

She held, 'I find and hold that this appeal is meritorious and it is allowed. The judgement of the lower court delivered on the 16th of November, 2015 and the judgment of the tribunal delivered on 24th October, 2015 are hereby set aside.

'The petition of the petitioners is dismissed. The return of Nyesom Wike as governor of Rivers State by the Independent National Electoral Commission is restored.'

The tribunal, which sat in Abuja held, in its judgment of October 24, 2015, in favour of the petitioners, voided the election on grounds of widespread violence and non-compliance with the Electoral Act.

It ordered a rerun within 90 days.
Wike, the PDP and INEC appealed the tribunal's decision at the Court of Appeal, Abuja. The appellate court, in a unanimous judgment by a five-man panel on November 16, 2015 upheld the tribunal's judgment.

Both decisions were set aside by the Supreme Court in the judgment that was delivered late on Wednesday.

The court, in a unanimous decision also dismissed the appeal by the PDP governorship candidate in Ogun State, Adegboyega Isiaka.

Isiaka had challenged the judgments of both the Court of Appeal and the Ogun State governorship election petition tribunal, which both upheld the election of Ibikunle Amosun as the governor of Ogun State.

Justice Akaahs, who read the lead judgement held that the appeal lacked merit and dismissed it.

The apex court also dismissed the appeal by the governorship candidate of the Labour Party in Ebonyi State, Edward Nkwegu.

Justice Chima Nweze, who read the lead judgment, held that the preliminary objection raised by Umahi succeeded in part.

He resolved the two issues on the main appeal against the appellant.

'No merit in this appeal. Umahi is the duly elected governor of Ebonyi State. Reasons will be given on Friday, January 29,' he held. - Punch.