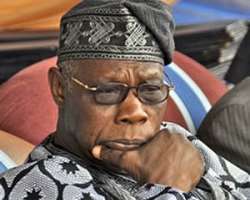 Former President Olusegun Obasanjo, has returned to his old habit of writing to key officers of government.

In a letter dated January 13,  members of the National Assembly, the former head of state raised concerns about some recent pursuits of the legislators especially as it concerns the transparency of of their own budgets.

In the letter to the legislators, addressed to Senate President Bukola Saraki and the Speaker House of Representatives, Obasanjo  accused of remained largely insensitive to  to the plights of Nigerians, arguing that they fix and earn salaries and allowances far above what the Revenue Mobilization Allocation and Fiscal Commission, RMAFC approved for them.

According to him, “The National Assembly will take a step back and do what is right not only in making its own budget transparent but in all matters of financial administration and management including audit of its accounts by external outside auditor from 1999 to date”

Obasanjo’s letter reads,
January 13, 2016
Distinguished Senator Bukola Saraki,
President of the Senate,
Federal Republic of Nigeria,
Senate Chambers,
Abuja.
Honourable Yakubu Dogara,
Speaker, House of Representatives,
National Assembly Complex,
Abuja.
It is appropriate to begin this letter, which I am sending to all members of the Senate and the House of Representatives through both of you at this auspicious and critical time, with wishes of Happy New Year to you all.

On a few occasions in the past, both in and out of office as the President of Nigeria, I have agonised on certain issues within the arms of government at the national level and among the tiers of government as well. Not least, I have reflected and expressed, outspokenly at times, my views on the practice in the National Assembly which detracts from distinguishness and honourability because it is shrouded in opaqueness and absolute lack of transparency and could not be regarded as normal, good and decent practice in a democracy that is supposed to be exemplary. I am, of course, referring to the issue of budgets and finances of the National Assembly. The present economic situation that the country has found itself in is the climax of the steady erosion of good financial and economic management which grew from bad to worse in the last six years or so. The executive and the legislative arms of government must accept and share responsibility in this regard. And if there will be a redress of the situation as early as possible, the two arms must also bear the responsibility proportionally. The two arms ran the affairs of the country unmindful of the rainy day. The rainy day is now here. It would not work that the two arms should stand side by side with one arm pulling and without the support of the other one for good and efficient management of the economy.

The purpose of election into the Legislative Assembly particularly at the national level is to give service to the nation and not for the personal service and interest of members at the expense of the nation which seemed to have been the mentality, psychology, mindset and practice within the National Assembly since the beginning of this present democratic dispensation. Where is patriotism? Where is commitment? Where is service?

The beginning of good governance which is the responsibility of all arms and all the tiers of government is openness and transparency. It does not matter what else we try to do, as long as one arm of government shrouds its financial administration and management in opaqueness and practices rife with corruption, only very little, if anything at all, can be achieved in putting Nigeria on the path of sustainable and enduring democratic system, development and progress. Governance without transparency will be a mockery of democracy.

Let us be more direct and specific so that action can be taken where it is urgently necessary. A situation where our national budget was predicated on $38 per barrel of oil with estimated 2 million barrels per day and before the budget was presented, the price of oil had gone down to $34 per barrel and now hovering around $30 and we have no assurance of producing 2 million barrels and if we can, we have no assurance of finding market for it, definitely calls for caution. If production and price projected in the budget stand, we would have to borrow almost one third of the 6 trillion naira budget. Now beginning with the reality of the budget, there is need for sober reflection and sacrifice with innovation at the level of executive and legislative arms of government. The soberness, the sacrifice and seriousness must be patient and apparent.

It must not be seen and said that those who, as leaders, call for sacrifice from the citizenry are living in obscene opulence. It will not only be insensitive but callously so. It would seem that it is becoming a culture that election into the legislative arm of government at the national level in particular is a licence for financial misconduct and that should not be. The National Assembly now has a unique opportunity of presenting a new image of itself. It will help to strengthen, deepen, widen and sustain our democracy.

By our Constitution, the Revenue Mobilisation, Allocation and Fiscal Commission is charged with the responsibility of fixing emoluments of the three arms of government: executive, legislature and judiciary. The Commission did its job but by different disingenuous ways and devices, the legislature had overturned the recommendation of the Commission and hiked up for themselves that which they are unwilling to spell out in detail, though they would want to defend it by force of arm if necessary. What is that?

Mr. President of the Senate and Hon. Speaker of the House, you know that your emolument which the Commission had recommended for you takes care of all your legitimate requirements: basic salary, car, housing, staff, constituency allowance. Although the constituency allowance is paid to all members of the National Assembly, many of them have no constituency offices which the allowance is partly meant to cater for. And yet other allowances and payments have been added by the National Assembly for the National Assembly members' emoluments. Surely, strictly speaking, it is unconstitutional. There is no valid argument for this except to see it for what it is – law-breaking and impunity by lawmakers. The lawmakers can return to the path of honour, distinguishness, sensitivity and responsibility. The National Assembly should have the courage to publish its recurrent budgets for the years 2000, 2005, 2010 and 2015. That is what transparency demands. With the number of legislators not changing, comparison can be made. Comparisons in emoluments can also be made with countries like Ghana, Kenya, Senegal and even Malaysia and Indonesia who are richer and more developed than we are. The budget is a proposal and only an estimate of income and expenditure. Where income is inadequate, expenditure will not be made. While in government, I was threatened with impeachment by the members of the National Assembly for not releasing some money they had appropriated for themselves which were odious and for which there were no incomes to support. The recent issue of cars for legislators would fall into the same category. Whatever name it is disguised as, it is unnecessary and insensitive. A pool of a few cars for each Chamber will suffice for any Committee Chairman or members for any specific duty. The waste that has gone into cars, furniture, housing renovation in the past was mind-boggling and these were veritable sources of waste and corruption. That was why they were abolished. Bringing them back is inimical to the interest of Nigeria and Nigerians.

The way of proposing budget should be for the executive to discuss every detail of the budget, in preparation, with different Committees and sub-Committees of the National Assembly and the National Assembly to discuss its budget with the Ministry of Finance. Then, the budget should be brought together as consolidated budget and formally presented to the National Assembly, to be deliberated and debated upon and passed into law. It would then be implemented as revenues are available. Where budget proposals are extremely ambitious like the current budget and revenue sources are so uncertain, more borrowing may have to be embarked upon, almost up to 50% of the budget or the budget may be grossly unimplementable and unimplemented. Neither is a choice as both are bad. Management of the economy is one of the key responsibilities of the President as prescribed in the Constitution. He cannot do so if he does not have his hands on the budget. Management of the economy is shared responsibility where the Presidency has the lion share of the responsibility. But if the National Assembly becomes a cog in the wheel, the executive efforts will not yield much reward or progress. The two have to work synchronisingly together to provide the impetus and the conducive environment for the private sector to play its active vanguard role. Management of the budget is the first step to manage the economy. It will be interesting if the National Assembly will be honourable enough and begin the process of transparency, responsibility and realism by publishing its recurrent budgets for 2016 as it should normally be done.

Hopefully, the National Assembly will take a step back and do what is right not only in making its own budget transparent but in all matters of financial administration and management including audit of its accounts by external outside auditor from 1999 to date. This, if it is done, will bring a new dawn to democracy in Nigeria and a new and better image for the National Assembly and it will surely avoid the Presidency and the National Assembly going into face-off all the time on budgets and financial matters.

While I thank you for your patience and understanding, please accept, Dear Senate President and Honourable Speaker of the House, the assurances of my highest consideration.