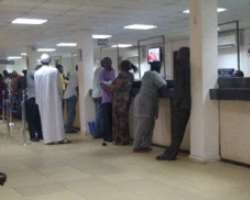 In a circular to banks last week signed by Director, Financial Policy & Regulation Department,  Mr. Kevin Amugo,  the CBN replaced the Commsion on Turnover (CoT) with CAT but subject to maximum of N1 per N1000 (Mille).

It stated, 'The Revised Guide to Bank Charges (RGBC) which came into effect on April 1, 2013 provides for  a phased elimination of COT charges in the Nigerian banking Industry. Under the Guidelines, a zero COT regime was to come into effect from January 2016.

The CBN noted that while the gradual phase out was being observed, some banks continued to charge Account Maintenance Fees in addition to the reduced COT rate, which in effect amounted to double coincidence of charges The CBN is not oblivious of the impact of declining crude oil prices; operation of Treasury Single Account; and other market turbulences on the viability and stability of the banking system.

'In furtherance of the mandate to promote and safeguard a sound financial system in Nigeria, banks are by this circular reminded that the 2016 Zero COT regime as jointly agreed during the 311th Bankers Committee meeting of February 12, 2013 has come into effect. In the interest of stability of the banking system, a Negotiable Current Account Maintenance Fee not exceeding N1 per mille may be charged in respect of all customer induced debit transactions. Please ensure strict compliance'.