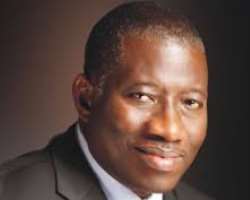 Former President Goodluck Jonathan will hold a world press conference in Geneva, Switzerland, on Wednesday. Guy Mettan, executive director of the Geneva Press Club, confirmed this in a statement, saying the event is part of activities lined up by circle of diplomats, in honour of Jonathan. The statement said the Nigerian leader would be hosted to a dinner at Intercontinental Hotel, Geneva, on the same day. Mettan said the two major issues that Jonathan will address are: security and civil peace in Nigeria and West Africa, in addition to improvement of health and education of children in the continent. He said accredited United Nations correspondents and Swiss journalists are expected to attend the conference. Jonathan, the only Nigerian leader who has risen to the peak of politics in a record of 16 years, has received international recognitions since he left office on May 29. In October, the Commonwealth picked him to lead a team of international observers to Tanzania for the country's general election. He shone like a star in the East African country, as about three national dailies wrote editorials on his heroic act of congratulating President Muhammadu Buhari, then his opponent, and choosing to step down voluntarily after losing election. In its editorial entitled: 'High profile figures among observers will add credibility to poll process, results', The Guardian of Tanzania wrote: “Jonathan's voluntary handover of power to the opposition wrote a new chapter for Nigeria's democracy, given the fact that it is rare for sitting presidents in Africa to hand over powers to winning opposition parties.” Earlier in January, Jonathan also succeeded former President Bill Clinton as the keynote speaker at the Hope Global Forum in the United States. Recently, he made history as the first African leader to win the Martin Luther King human rights award. The organisers of the award, which was presented by the Southern Christian Leadership Conference, founded by the late American human rights activist – Martin Luther King Jr – said Jonathan was recognised for his leadership in human rights in Africa's most populous nation, Nigeria.